As the clock ticked down last Friday, May 7, on University of Texas Vice President for Student Affairs Juan González's allotted time for public input on the future of the Cactus Cafe, local grassroots group the Friends of the Cactus Cafe submitted a business plan in favor of the self-operating model. The impressive 25-page proposal calls for increased student participation in all aspects of the music venue's operations through internships, student discounts, and enhanced interaction with the Student Events Center and KUT. More importantly, the plan suggests possible new revenue streams, such as merchandise and a small offering of organic food options (currently unavailable in the Texas Union), supplemented by an annual benefit concert and a membership program for public and corporate donations (see "UT Urged to Consider a 'Win' for Cactus," News). Around the same time, OTR finally tracked down González for further clarification about the two remaining proposals. That was the idea, anyway.

Off the Record: When will you be making a decision?

OTR: What exactly do you mean by soon?

OTR: How will that information be dispersed?

JG: I haven't quite figured that out.

OTR: Will there be a special session called for the Union board to discuss your decision?

JG: Not that I'm aware of. They had their last session on April 30.

OTR: Has there been any talk of proposals to save informal classes?

JG: Not in the last week.

OTR: Has there been any in the last month?

OTR: In the current proposal to keep the Cactus under Union management, does that include its current staff?

JG: Those decisions haven't been made.

OTR: What exactly has been defined as part of the self-operating model?

JG: That there are two very viable, excellent models that have been placed on the table, and I'm considering them.

OTR: The Student Friends of the Cactus Cafe introduced a proposal that included greater access for students and some different financial initiatives. Why hasn't the self-operating model been elaborated upon to include some of those ideas and make it a more appealing option?

JG: I'm not agreeing with the premise that you said.

OTR: Which premise is that?

JG: That they submitted a model or that it hasn't been elaborated on or discussed.

OTR: Your guiding principles outlined at the Texas Union board meeting last Friday differed from those agreed upon during the Cactus Conversations. It went from six to four. Of those, "continuation of daily (six days per week) cafe and bar operations with supervision by professional experienced staff" was cut. Is that not one of your guiding principles anymore?

JG: I gave the three guiding principles that I'm really anchoring my decisions on. I believe it was an open forum. Were you present there?

JG: Good, then I don't have to repeat myself.

OTR: You said at the open forum that you wanted the Cactus Cafe to be the hottest ticket in town. As far back as December, you approved the closure of the venue without any faculty or student input. Why the sudden change in tune?

JG: I don't agree with your premise.

JG: You said that I had no student or faculty input.

OTR: Based on the documents that have been obtained since then ....

OTR: How would you explain it?

JG: I'm not explaining it to you.

OTR: Why do you want to keep the Cactus open?

JG: I think that we've heard from the general public that it's a treasure to be maintained, and we are committed, as I've said, that the Cactus will live on and will remain.

OTR: What were the criteria used to determine that Griff Luneburg would be offered a position expiring in 2011 and that the Cactus bar manager would receive a full-time job without expiration?

JG: I'm not explaining individual personnel actions. The thing that I've said publicly, no personnel would be losing their jobs as a result of these decisions.

OTR: So to quickly recap, you are at some point reaching a decision, you don't know how you will release that information, and there's no way to elaborate upon the self-operating model. 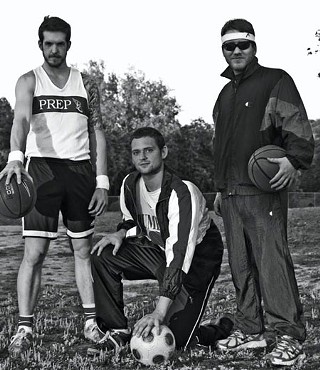 Imagine if you cut out all of MGMT's psychedelic tangents and Ratatat reassembled them. That's a decent starting point for Freshmillions. The local daft punks, opening for All Leather at Mohawk on Sunday, May 16, craft collage-rock, layering live instrumentals over snippets from old jazz records. "The samples have been so disfigured and contorted they're no longer recognizable," relates bassist/composer Geoff Earle, who freelanced for Columbia. "I'm pretty sure that legally we're in the clear." Freshmillions' self-titled debut, which beats with a metal heart thanks to production from the Sword's Bryan Richie, is the latest cosmic egg hatched by Insect Records, the new label from Attack Formation general Ben Webster. It's quickly become a hive for Austin's left-of-center avant-rock community, evidenced by a recent limited-edition compilation featuring Formation offshoots (Butcher Bear & Charlie, Reaganometry, Explosion Horse) along with Zorch and Total Sound Group Direct Action Committee, Webster's project with Tim Kerr, but there's a catch. The comp is only available as a free bonus for spending $30 at Domy Books, Backspin Records, or End of an Ear. Spend accordingly.

Having turned heads with his work on Revenant's Albert Ayler box set, Holy Ghost: Rare & Unissued Recordings (1962-70), Heavy Light Records' co-owner Noel Waggener was handpicked by Billy Corgan to design the first installment in the Smashing Pumpkins' 11-EP epiphanic guitar saga Teargarden by Kaleidyscope, which was inspired in part by the late Sky Saxon (see "March of the Flower Children," July 24, 2009). Due in stores May 25, the wooden box boasts a marbled 7-inch single, four-song CD, and a hand-carved stone obelisk that was all recently plugged by Jay Leno. "In the architecture of the package, there are a lot of hidden elements based on the principles of numerology and alchemy," notes the local label man and artist, now compiling a second volume of rare Texas funk for Jazzman Records (see "Do the Tighten Up," May 16, 2003). "We had a fair amount of similar interests in what some people would call mysticism."

After 30 years, the Go-Go's officially drop the beat with their farewell tour, Happily Ever After, which concludes at the Paramount Theatre on July 27. "Basically Belinda [Carlisle] wanted to retire being a Go-Go," relates the group's local bassist and producer Kathy Valentine (see "This Town," Feb. 9, 2007). "Even though it's been under the radar and low profile, we've actually had a really good career these last 15 years for a band that doesn't try to have hits or put out records."

Puppy love: Before her performance at the Frank Erwin Center on Wednesday, country diva Carrie Underwood donated $10,000 to Austin Humane Society through the Pedigree Adoption Drive.

Willie Nelson will be honored with a bronze statue outside the new Austin City Limits studio behind City Hall on Second Street, Mayor Lee Leffingwell announced last Thursday, along with plans to rename the strip to Willie Nelson Boulevard. Meanwhile, the marker for Doug Sahm Hill is scheduled to be erected on the cosmic cowboy's birthday, Nov. 6, at the peak of Butler Park. As senior Music writer Margaret Moser chuckles, "So you have to get high to read it."

Danny Crooks' annual Steamboat reunion on Sunday, May 16, at Threadgill's World Headquarters, featuring Extreme Heat, Pushmonkey, and Steamroller, among others, has helped spur a full-blown reunion and talk of a new album from headliner Sister 7. "If we're going to keep playing, we all agreed we need some new material," concedes guitarist Wayne Sutton.

Mirroring Sunset's pledge drive for the local indie pop ensemble's new double vinyl LP, Love Shines but the Moon Is Shining Too, Austin's volunteer-run Church of the Friendly Ghost (see "Culture Club," Nov. 13, 2009) is using Kickstarter to raise funds for the New Media Art & Sound Summit, a proposed three-day music festival in June. The deadline to donate is Tuesday, May 25, at www.kickstarter.com/projects/1541451910/new-media-art-and-sound-summit. 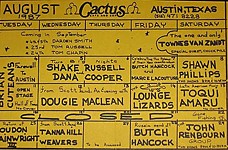