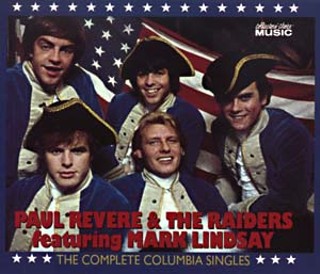 
Paul Revere & the Raiders didn't just hold down the fort against the British Invasion – between 1966 and 1969 they sold more records than any band except the Beatles and the Stones. Via television and 16 Magazine, the Raiders rivaled the Monkees, with fans so devoted that three of them left their ninth-grade English class weeping when guitarist Phil "Fang" Volk got married. Though undeniably marketed for the teenybopper audience, the group's history as a pre-Beatles show band paid off musically throughout their teen idol career. Those roots are evident in the covers ("Louie Louie," "Ooo Poo Pah Doo") and B-side instrumentals ("Blue Fox," "Shake It Up") chosen to not compete with their singles' A-sides. The Raiders could be master imitators, doing "Sometimes" as "Heart of Stone," the Beach Boys on "Corvair Baby," and the Kinks on "Just Like Me," but their signature sound was composed of tightly knit vocals and three-minute freeze-frames of 1960s radio hits. They weren't telling teens that the funky "B.F.D.R.F. Blues" stood for "Big Fucking Deal, Rat Fuck," but they sang about a Vietnam vet confronting his cheating girlfriend ("Steppin' Out"), drugs ("Kicks"), and Native American injustice ("Indian Reservation"). The 3-CD Complete Columbia Singles spins overall tribute to Paul Revere's bandleading talent, Terry Melcher's production, and especially underappreciated vocalist Mark Lindsay. More than just a good-looking singer and sax player, Lindsay's still a charismatic showman in a class with James Brown and Mick Jagger and on par with them as a songwriter, composing nearly two-thirds of the set's 66 songs. They don't make 'em like the Raiders anymore.