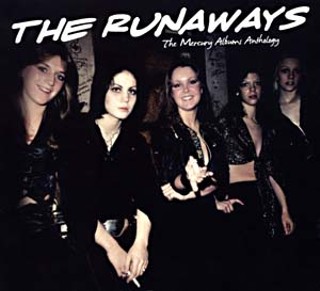 
Dakota Fanning's ass-kicking inhabitation of "Cherry Bomb" on the soundtrack to The Runaways matches her and biopic foil Kristen Stewart trading teen melodrama on the epic "Dead End Justice." The real thing, fronted by Cherie Currie (Fanning) and Joan Jett (Stewart), shouts equally contrived and no less convincing. Four of the L.A. girl group's five raunchy LPs gather on the 2-CD Mercury Albums Anthology: the Runaways self-titled 1976 debut, second album Queens of Noise, non-U.S. release Live in Japan, and Waitin' for the Night, the latter three all released the following year. Leader Jett, singer Currie, Lita Ford on top guitar, and the rhythm section of Jackie Fox and Sandy West may have been labeled "jailbait," but they were productive puppets for music impresario Kim Fowley. Anthology torques the ladies' ultimate transcendence of rudimentary rock into DIY trailblazers. Fetishistic Japanese-style music packaging opens on the roundhouse chug of "Cherry Bomb," the aural M-80 firecracker lighting a flawless first album, from the cowbell beat of "Rock & Roll" and Grand Funk Railroad of "American Nights" to the salacious Rocky Horror Picture Show-type suite "Dead End Justice." Bottling the Runaways' hormonal emancipation in no uncertain efficacy is Live in Japan, but Queens of Noise – slower, spottier – proves no less dramatic ("Born to Be Bad"). When the cowbell tempo rises, as on the Jett-led "I Love Playin' With Fire," it's as irresistible as anti-cheerleader chant "Hollywood." Waitin' for the Night slips further, Currie and Fox gone, but more in material than lithe execution, which might be described as metallic-lite given the UFO guitar break on "Wasted." Future I Love Rock 'n' Roll highlight "You're Too Possessive" sets the stage for Jett's solo ascendance.