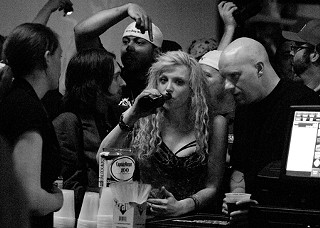 
Who knows what the hell is going on in the mind of Courtney Love? Moreover, who cares? For the better part of an hour, Kurt Cobain's ever-confessional widow, the last remaining original member of the seminal 1990s grunge outfit Hole, transfixed a capacity crowd of steady fans and skeptical critics (as well as Love's former co-star Woody Harrelson). More fender-bender than train wreck, the reasonably solid set revealed Love's talent and rage well intact even if her sanity isn't. "My voice is shot," she declared after the first few songs, "but I still got it. I can still get it up. I still get an erection." Love hit hard with old hits "Malibu" and "Doll Parts," setting off a fist-pumping shout-along from the Gen X ladies down front. She also played surprisingly strong new songs off the upcoming Hole relaunch, including "Skinny Little Bitch." Less successful was Love's version of the Stones' "Sympathy for the Devil," but she nailed her cover of Fleetwood Mac's "Gold Dust Woman." Closing with Kim Carnes' "Bette Davis Eyes," Love could barely sing. With that, she knifed through the stunned audience and grabbed a beer at the bar.