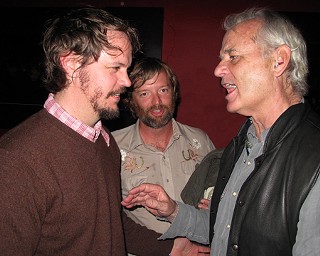 "Y'all couldn't go to South by Southwest, so we've brought South by Southwest to you," the guard captain told the inmates huddled inside the chapel at the Travis County Correctional Complex on Friday morning. Commemorating the U.S. launch of Jail Guitar Doors, a musician-led initiative that assists inmates in their rehabilitation process by providing instruments to prison systems, founder Billy Bragg, MC5 guitarist-turned-stateside ambassador Wayne Kramer, and Tom Morello and his Street Sweeper Social Club shared inspirational songs of brotherhood and redemption that rang out like chimes of freedom.

The event was proof of SXSW's omniscient presence last week, spilling over into every hour and square inch of Austin. Broken Bells, the debut collaboration of the Shins' James Mercer and Danger Mouse, paved paradise in the lower level of a parking garage on Red River, while Jack White's Third Man Records set up shop at Frank. At a warehouse on the corner of Third and Brazos, Courtney Love of Hole looked and sounded like something the cat dragged into Perez Hilton's hyperexclusive bash, a stark contrast to the blunt rhymes of immediate predecessor Snoop Dogg.

Like an indie version of the rodeo across town, IHeartComix and Mad Decent's Carniville popped its collective big tent at the Mexican American Cultural Center – complete with a few rides and funnel cake – where the Very Best brought the Warm Heart of Africa to an otherwise bitterly cold Saturday afternoon. There was even rumor of a rooftop appearance by U2, but apparently only Statesman newbie Patrick Caldwell fell for that one.

By the numbers, the 24th annual Music Conference hosted more than 1,850 acts across 82 stages. The total of official Music registrants was just over 13,000, a 11% jump from last year, but for the first time was eclipsed by the Interactive portion, which boasted 14,251 registrants, a 33% increase that mirrored the growth of the Film Festival. No wonder Beerland gatekeeper Max Dropout felt compelled to post this sign: "Once we hit capacity it will be a one-in/one-out situation. I don't care how many hits your shitty blog gets a month. Fuck Google Analytics. And besides, bloggers aren't real writers. Sorry. I just don't respect you."

The mash-ups between the Festivals certainly provided some of the week's most memorable scenes. After ushering in the Conference by being inducted into the Texas Film Hall of Fame last week, Michael Nesmith of the Monkees filmed and transmitted live performances from Carrie Rodriguez, the Texas Tornados, Del Castillo, and Asleep at the Wheel at Austin Studios for his simulated VideoRanch.com. In town for the Doors documentary When You're Strange: A Film About the Doors, guitarist Robbie Krieger assisted Stone Temple Pilots for "Roadhouse Blues," which by all accounts topped even Blue Öyster Cult's Extraterrestial Live.

Likewise, Runaways manager Kim Fowley jail-baited the Kids Are Alright panel, led by the Chronicle's Margaret Moser on Friday, while Cherie Currie joined San Antonio's black-hearted Girl in a Coma later that night at Buffalo Billiards for "Cherry Bomb." The real treat for OTR was the orchestral-funk magus of the Kashmere Alumni Stage Band, which more than lived up to the title of Mark Landsman's Lone Star States winning documentary Thunder Soul at the Chronicle Film party on Monday at La Zona Rosa.

More than one-third of the bands at SXSW were carrying visas, stamped from 59 different countries. That contingency was more organized and accessible this year than ever before. Some of the credit for that should be directed to Austin's Dart Music International, a nonprofit that helps assist foreign bands route every aspect of their stateside tours, which rose to the standard established by Japan Nite and the British Music Embassy. Dart hosted 28 international acts on 21 bills, including a lunchtime series at Mi Casa that included the dive-bombing post-punk of P.K. 14, which returns to Emo's on Tuesday, March 30, as part of the China Invasion Tour.

"This year catchiness was king, with few misgivings about being too accessible," observed Jon Pareles in The New York Times on Monday, March 22. "Bands weren't counting on a second glance."

Judging from the precocious folk of England's Slow Club, the Fresh & Onlys' late-1960s garage-grime, and the phantom electro-chill of Small Black and Washed Out, OTR's inclined to agree. Other personal highlights included Dan Black, who came on like the UK male counterpart to Lady Gaga, and Warpaint, a Los Angeles quartet that locked into a funky groove at Mohawk on Wednesday afternoon like four blonde redheads with the femininity of PJ Harvey and seductive trance of early Can.

Of course, there were countless notable exceptions. The scenic, minimalist compositions for piano prepared by Hauschka at Central Presbyterian Church came alive through the German composer's bag of tricks – Scotch tape, beads, paper, and even pingpong balls – sounding at times like an alternate soundtrack to Eternal Sunshine of the Spotless Mind. The psychedelic cult Yahowha 13 scared away the clientele at Roy's with its free-form lunar transmissions. Under the guise of Demolished Thoughts, J Mascis and Sonic Youth's Thurston Moore assaulted Red 7 with terminally bored punk covers and indecipherable tantrums to a bemused audience that included Bill Murray.

It was a week of new beginnings (Court Yard Hounds, Nas & Damian Marley, and local legend Roky Erickson with Okkervil River) and welcomed returns: the Superfuzz Bigmuff and light-speed surf of Austin's Sixteen Deluxe and Man or Astro-Man?, respectively, and Houston's MC tag team Chamillionaire & Paul Wall, not to mention indisputable legends. Smokey Robinson led a genuine Motown revue on Friday, while the Kinks' Ray Davies closed his Thursday set with a trifecta ("Celluloid Heroes," "Dead End Street," and "Low Budget") that, as Rolling Stone's David Fricke noted afterward, could have served as a keynote address.

For the first time, the Austin Music Awards closed out SXSW at the Austin Music Hall on Saturday. Bob Schneider earned a clean sweep, but the local stalwart (and by your vote, 10th best Industrial/Goth artist in town) got caught red-handed with the Cringe at Rachael Ray's Feedback party at Stubb's earlier that afternoon reading lyric cues for the Beatles' "I've Got a Feeling" off his palm. The real winner proved to be locals Mother Falcon, whose breakthrough orchestral-pop received the only standing ovation aside from Cactus Cafe manager Griff Luneburg, who accepted the award for best Acoustic Venue. "We always knew the Cactus was an important room," Luneburg opined. "Everyone feels like they own a piece of it."

Amidst the chaos and confusion, there was one constant: Alex Chilton. The Big Star visionary and enigmatic solo songwriter, who was scheduled to perform at SXSW but died last Wednesday, became the subject of the scheduled panel I Never Travel Far Without a Little Big Star and inspired countless covers, from Cheap Trick at Austin City Limits ("In the Street") to the Drive-By Truckers ("September Gurls"), concluding with a life-affirming tribute at Antone's that featured R.E.M.'s Mike Mills, M. Ward, Chuck Prophet, and the Meat Puppets' Curt Kirkwood, among others.

"I remember Alex coming to audition on a cold, rainy Memphis day in the fall of 1966 in cutoff blue jeans, no shoes, and a T-shirt, looking a bit disheveled," recalls Austin bassist Russ Caccamisi, who notched a Gold Record for "The Letter" with Chilton in the Box Tops and currently gigs at Friends with the Stevie Norman Band. "He blew us away. Even at that age, he was difficult, but a tremendous talent.

"It's a very, very sad loss for me personally and to all of music. He will be missed."