A couple years ago I had the good fortune of attending All Tomorrow's Parties in England. Ice Cream Man was supposed to sling a bunch of cream at the event, but things fell through. Since I already had my plane ticket and ATP had a spare room, I flew across the pond to give away 100 or so ice creams and rock out back-to-back weekends.

The first of those weekends was curated by Pitchfork at Pontins Camber Sands, ATP's original location. I had heard a tiny bit about Carsick Cars and decided to buy their disc; unfortunately, I'd already missed their set that weekend. I had to wait two years to see them.

Carsick Cars are now touring the U.S. as part of the Chinese Invasion tour, along with fellow Beijing legends P.K. 14, Xiao He, AV Okubo, White, and Snapline. Thanks to help from Converse, they're playing gigs in Texas and California during the next month. The lineup's quite diverse, and the indie pop/noise/punk spirit of Carsick Cars makes their music an easy entry point into the underground Chinese music scene.

Listening to Carsick Cars reminds me of when I used to ditch school to go see ska and punk shows. Everyone jumped around and had a great time, because that's what the music made you want to do. Maybe I'll be the only one trying to sing along to Carsick Cars in a language I don't understand, but ... I hope not. 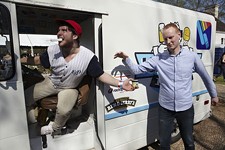