In the chapel of the Travis County Correct-ional Complex on Friday afternoon, Wayne Kramer introduced himself to inmates by way of a confession: "I'm Wayne. I'm an alcoholic." The former MC5 guitarist is the subject of the Clash's 1978 B-side "Jail Guitar Doors" and a testament to the vision of Billy Bragg's nonprofit initiative of the same name. Founded in 2007 to honor the fifth anniversary of Joe Strummer's death, Jail Guitar Doors provides instruments to prison systems to help assist inmates in their rehabilitation process. On the occasion of the program's official U.S. launch in Austin, Kramer related his own personal rock bottoms ("Homelessness, bankruptcy, prison, hep C") and offered a strikingly honest and inspiring message about the possibility of recovery. "The guitar gave me a way to escape prison," Kramer professed during a 20-minute question-and-answer segment with the inmates. "When I played guitar, I wasn't in prison. I was in the world of music. I was in the world of chords, lyrics, and melodies, and I was free within that moment. It also gave me something to do with my time that was positive and constructive." That much was reiterated by Kramer's uplifting solo turn on Bob Marley's "Redemption Song," which left nary a dry eye in the room. Bragg followed with his emotionally wrought "I Keep Faith," while Tom Morello and his Street Sweeper Social Club struck a chord closer to Johnny Cash's At Folsom Prison. The Foo Fighters' Chris Shiflett joined in for the penultimate group finale, "I Shall Be Released." "These guitars were donated by people who want to help you in the process of rehabilitation," Bragg concluded. "This is a key not only to unlock the doors of this place, but to unlock the door to the rest of your life, a way to help you process the problems and struggles that we all face." See Bragg's "My SXSW" diary.

Rolling Out the Red Carpet 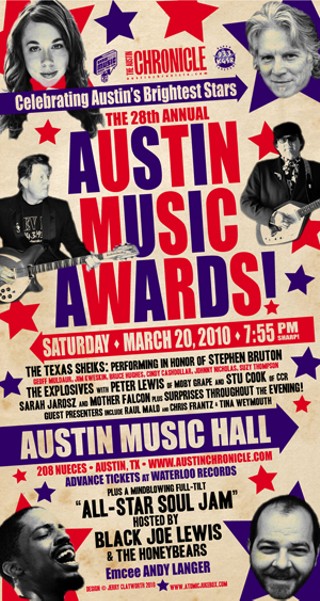 The buzz in the Chronicle's South by Southwest headquarters at the Omni has been steadily rising as the Austin Music Awards at the Austin Music Hall finally arrives tonight. Previously confirmed guest presenters Tina Weymouth and Chris Frantz will be joined by fellow Talking Head Jerry Harrison, who discovered (and later produced) Austin's the Black & White Years two years ago at SXSW. Likewise, U2's Zoo TV deejay B.P. Fallon is presenting the award for Best Tribute Band to U2 cover act Mysterious Ways. Showcasing folk songstress Sarah Jarosz was joined Thursday night by Decemberists offshoot Black Prairie, paving the way for a possible encore performance. Event coordinator Margaret Moser even hinted at a "Grape Jam" at the end of the Explosives' set. The Awards kick off at 7:55pm sharp with introductions from City Council Member Laura Morrison and Mayor Pro Tem Mike Martinez.

When the Saints Go Marching In

"There's this curse to New Orleans music," posits photographer and Chronicle contributor Aubrey Edwards. "The music is so insular it never escapes." For the past year, she and writer Alison Fensterstock have documented the musical phenomenon known as "bounce," a hyper-regional form of New Orleans hip-hop from the mid-1980s based on the "Triggerman beat," which conjures the catharsis of brass band parades and Mardi Gras Indian chants. The photo essay, "Where They At," opening later this year at the University of New Orleans' Ogden Museum of Southern Art, has swelled into a collection of oral histories, various audio and video, and more than 50 portraits, a portion of which are on display here in Austin at the Birdhouse Gallery (1304 E. Cesar Chavez), and the closing party this afternoon (2-5pm) features performances from veterans Vockah Redu and Big Freedia. That's only a teaser for the first-ever bounce showcase later this evening at Submerged (333 E. Second), featuring scene originators (Partners N Crime, DJ Jubilee), leading ladies (Ms. Tee, Magnolia Shorty), and the self-proclaimed sissies (Big Freedia, Katey Red). "Bounce artists for the most part don't get the opportunity to leave New Orleans, much less to do so as a community," Edwards enthuses. "We're all riding this post-Saints energy."

Attention label A&R – if such a thing still exists – the Black Angels are open for business. The local psych aviators (check "I See Dead People," May 9, 2008) were dropped from Interscope imprint Suretone January 2009 after failing to complete an album by the label's deadline, but have since mastered their third album. "We basically got free money to record," relates guitarist Christian Bland. The Angels descend on the Galaxy Room Backyard at 1am, while Bland moonlights with Angelic singer Alex Maas in Ghost Songs.

Will Johnson of Centro-matic currently has an art exhibit at IF+D (208 Colorado), composed primarily of his painted portraits of Negro League baseball legends. "I'm just paying my respects, trying to transmit a few of these stories," relays Johnson via e-mail. The Monsters of Folk drummer is still looking for a few more hosts for his living-room tour across America with Anders Parker. Expect to hear a preview of the pair's previously reported Woody Guthrie archives project with Jay Farrar and Jim James of My Morning Jacket. "As of this past weekend, the Guthrie release is fully tracked," updates Johnson. "It's presently being mixed."

LEMMY co-director Wes Orshoski is filming Ian McLagan's showcase tonight at the Central Presbyterian Church (11pm) for a future documentary. There's certainly no shortage of material to work with. The local pianist just returned from another round of rehearsals for a possible Faces reunion across the pond. "We're closer, but there is no news," Mac assures. "I've had enough of England. We just had a great five days of rehearsals there in the bitterest cold."

With the noted exception of South by Express passes, there will be no special ticketing arrangements for the Big Star tribute to the late Alex Chilton at Antone's tonight (12:30am), according to SXSW Creative Director Brent Grulke. As of press time, no special guests had been confirmed, but X's John Doe, Mike Mills of R.E.M., and M. Ward, along with members of Cheap Trick, are likely to appear.