Peter Rosenberg's Noisemakers With Bun B 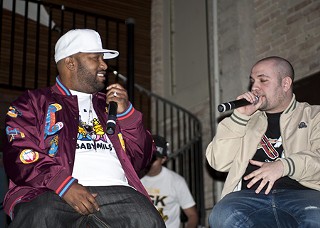 Peter Rosenberg's Noisemakers With Bun B


UGK hit "Int'l Players Anthem (I Choose You)" thumping in the background, Texas rap legend Bun B descended the stairs of Aces Lounge after hearing what amounted to his living eulogy, read by Hot 97's Peter Rosenberg. The sixth edition of Rosenberg's Noisemakers series, and the first ever outside of New York City, blurred the line between the club and Convention Center as the James Lipton of the rap game sat down with the Port Arthur rapper, born Bernard Freeman. "Along with his partner Pimp C, rest in peace, Bun B wrote the blueprint for Southern rap while showing a generation of kids who weren't from New York or L.A. or the Bay that they could do hip-hop their way," Rosenberg testified. Bun chronicled his come-up from his first rap name (Shadow Storm) to going from Pimp C's bedroom studio to a major label in less than a year. "In '92 people couldn't really grasp the concept of somebody from their town being signed to a record label. We didn't get no Source covers, we weren't in any magazines, didn't have no videos. My mama didn't realize I was a real rapper until 'Big Pimpin'.' Until then she thought I was selling dope because I wasn't on TV."