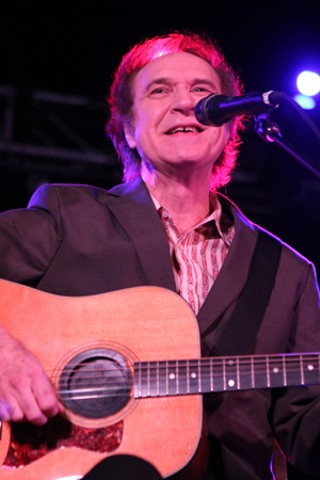 
Ray Davies wasn't playing for nostalgia's sake. Three-quarters of his 20-plus song set at La Zona Rosa Thursday night was just Davies and Irish guitarist Bill Shanley, dueling acoustic instrumentalists, with the latter offering light harmonies and backup. Davies remains a natural raconteur with a vaudevillian knack for mimicry. He told of being on the Late Show With David Letterman and did a passable Paul Shaffer impression before playing "In a Moment," one of several tracks he visited off 2007's Working Man's Cafe. In an acoustic vein, Davies turned "Where Have All the Good Times Gone" into a dirty blues; "Right here!" some joker answered to the song's central question. But the joker was right. Davies included a heartfelt dedication of "Till the End of the Day" to his friend and fellow New Orleanian Alex Chilton (Davies has called the Crescent City home for the past decade). The showcase was mostly lean muscle, with some Monty Python thrown in for good measure. Davies also spoke warmly of his brother Dave. "Postcard From London," a new duet Davies recorded with his "longtime friend" Chrissie Hynde was performed with Shanley. Songs reworked on The Kinks Choral Collection offered the thrill of recognition and memory, drawing listeners into this elder statesman's rascally worldview. "This is a special selection of Ray's songs that have been in television and movies," Davies announced when he wrapped the first hour of a 90-minute set. Then he played "I'm Not Like Everybody Else" (The Sopranos) and "Nothin' in the World Can Stop Me Worryin' 'Bout That Girl" (Rushmore). Finally, the 88s, who backed the late Elliott Smith before joining this survivor on tour, joined Davies for rousing, plugged-in versions of "You Really Got Me," "David Watts," "Celluloid Heroes," and the Kink's greatest hit of all, "Lola." Long live the King of Kinks.