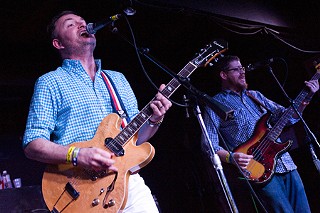 
So Miles Kurosky (ex-Beulah) used to be in this band called Beulah. Its albums were sort of like, "Hey, you got your Loaded in my Whipped Cream and Other Delights" (or Elephant 6 West if you're a hipster with a sense of history), and they were most excellent. Not many folks bought said LPs, and the San Franciscans called it quits. Now, six years on, Kurosky (ex-Beulah) is making albums again, or just album, singular, to this point. It sounds, not surprisingly, like his previous band, and in fact, The Desert of Shallow Effects (Sony) features former bandmates of Kurosky (ex-Beulah). Seeing how the disc has been on record-store shelves for literally days at this point, the new material actually had a leg up here, the production-heavy Beulah songs not always translating to expectations live. So live debuts like "Dog in the Burning Building" didn't carry the weight of expectations. Somewhat paradoxically, though, the Beulah material that Kurosky (ex-Beulah) did play, both "Emma Blowgun's Last Stand" and "Popular Mechanics for Lovers," were probably set highlights. Probably has something to do with nostalgia, because even if most people in attendance were getting a jump on Rogue Wave next, they weren't even aware what the nostalgia was for.