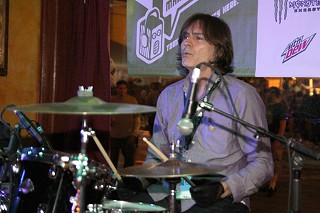 According to SXSW Creative Director Brent Grulke, the scheduled Big Star showcase at Antone's on Saturday will now serve as a tribute and benefit for the family of singer/guitarist Alex Chilton, who died on Wednesday. Barring some unforeseen complications, the panel will also proceed as scheduled. "There are a lot of people that want to participate," says Grulke. "We still need to meet the band and figure out exactly what they want to do." The showcase will feature a variety of guest vocalists, though none have been confirmed, and the show is scheduled to be taped, with master recordings being transferred to Big Star's Jody Stephens for some sort of future release. Due to the expected high demand, SXSW is currently weighing a few ticketing options, but nothing has been decided at this time.

"I want to say how much I appreciate everyone's support," Stephens prefaced a performance by his Ardent associates Star & Micey at Barbarella last night as part of the Memphis Music Foundation showcase. "I'll miss him a lot. He was a big part of my creative soul for the last 30 years." Star & Micey followed suit with the stark, chilling introduction to Big Star's "Thirteen," while Stephens sat in on drums for the trio's soulful closer "Nelson."

"What I learned from music videos is that you start with the music, figuring out how you realize it pictorially," related Michael Nesmith, former ringleader of the Monkees and writer/producer of long-form music video Elephant Parts, which earned the first-ever Grammy for Video of the Year in 1982. Inspired in part by conversations with The Hitchhiker's Guide to the Galaxy author Douglas Adams, Nesmith began developing what would become VideoRanch.com in 1998. It's a simulated music venue that allows patrons to create their own avatars, interact with other users, and watch real-time live performances, like the bull-fighting boleros of local Latin rock powerhouse Del Castillo yesterday morning, which are shot against a green screen and embedded onto a virtual stage. In other words, VideoRanch is where all the passions and talents of the Houston-born techie – authur of Americana essentials "Different Drum" and "Joanne" – merge. "I never really got into playing video games; it was always too restrictive in that it forced you into certain modes," surmises Nesmith, who kicked off SXSW Film by being inducted into the Texas Film Hall of Fame last week. "If you can build your own world, why wouldn't you include music?" VideoRanch is filming for the rest of the week at Austin Studios, where the Coen brothers' True Grit is entrenched, not to mention Robert Rodriguez's Predators installment, and features a tantalizing lineup curated by Nesmith which includes Carrie Rodriguez, the Texas Tornados, Steve Poltz, Asleep at the Wheel, and Lambchop. "It's a completely pristine and controlled environment," concludes Neismith, who would like to establish the operation permanently in Austin. "This is a blank slate that allows the artists to do exactly what they want to do." Cross over at www.videoranch3d.com.

Getting up is always the hard part, especially when Chamillionaire and Paul Wall kept rolling out greatest hits well past 2am the previous night, but KGSR 93.3FM takes care of the rest from there. The local station is once more broadcasting from the Four Seasons (6:30-10am), providing breakfast tacos and coffee with proceeds benefiting the Seton Shivers Cancer Foundation and of course, an unmatched lineup of sunrise performances assembled by Austin Music Awards host (and OTR's station co-worker) Andy Langer. Thursday morning, OTR caught New Zealand's Gin Wigmore, whose rough-hewn neo-soul called to mind Amy Winehouse's 2007 SXSW breakout and was embellished by Ryan Adams' Cardinals.

The effect of the Octopus Project's Hexadecagon experiment – a "16-sided audiovisual panorama" – should be comparable to stepping inside a snow globe. At Whole Foods this evening, 7:30 & 9pm, the local electronic wizards are performing in the round, enclosed by the 600-capacity audience and an eight-channel speaker system, with special eight-channel video being projected overhead. The idea has been in the works since late last year and melds the Octopus' animated instrumental landscapes with more minimalist compositions inspired by Terry Riley and Steve Reich. "It's been a bunch of 16-hour days trying to make everything as intense as it possibly can be," relays multi-instrumentalist Josh Lambert, adding that all of the music and video was written specifically for this occasion and may develop into the Project's fifth album. "We've only done one test at Whole Foods, but things sound pretty mind-blowing all spread out. You can actually feel the sounds moving around your head. I'm really hoping that folks let themselves get wrapped up in the whole thing." Delve deeper into the OP's garden with Lambert at the Chronicle's Music blog: austinchronicle.com/earache.

As has come to be expected from projects involving Okkervil River, Roky Erickson will release an appendix to his forthcoming comeback for Anti-, True Love Cast Out All Evil, called Singing Grandfather. The title track's a duet with Okkervil captain and collaboration producer Will Sheff. "I didn't want things to be overly respectful because I think that can often result in something very boring," relates Sheff. "I wanted something with the rough edges." The same sentiment holds true for Okkervil's new album, which Sheff is currently producing. "I feel much more confident pursuing what I'm hearing in my head about the songs."

Austin's Future Clouds & Radar backed Nicole Atkins at La Zona Rosa, but the pairing isn't as off-the-cuff as it might have appeared. For the last year, Future Clouds frontman Robert Harrison has been co-writing and working with the West Coast noir songstress for her upcoming second album, along with recording the first installment in his new side project, Sir Parker, for which he writes and produces material for contemporary artists. Both albums are tentatively set for release this summer. "The idea is to create my fantasy record, the album that I'd like for them to make," relays Harrison, who tracked down Atkins after hearing she had referenced his previous outfit, Cotton Mather (see "Strawberry Fields Forever," Nov. 14, 2008). "It's shamelessly retro, going for a Motown thing." The two have an encore appearance today at Brooklyn Vegan's day party at Club de Ville, 1pm.

Austin's David Garza seems to have a new release for every appropriate occasion. Commemorating his official showcase tonight at Kenny Dorham's Backyard (9pm), the prolific pop maestro, who gets inducted into the Austin Music Hall of Fame at the Austin Music Awards on Saturday, is dropping Shed Light (2000-2010), a 20-song compilation of unreleased material that features remixes of his Dream Delay standouts "Just the Bass" and "Dead French Dudes." A limited number of physical copies will be available at the show, but the collection can also be downloaded for free at www.soundcloud.com/cosmicaartists/sets/david-garza.