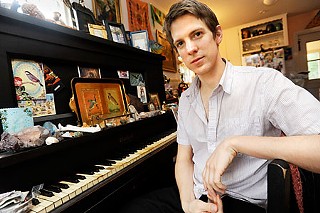 Shearwater's new album, The Golden Archipelago (Matador), opens with a recording of exiled Bikini Atoll islanders singing their national anthem. Bikini Atoll has been uninhabitable since the mid-20th century due to its use as a nuclear bomb test site by the United States. Alongside the album's thematic concern with islands, the anthem imbues Archipelago with an ethical imperative both for Shearwater and its listeners – to tread more mindfully on the earth.

"No ethical imperative is intended," counters Jonathan Meiburg, on tour in Europe. "I loved that recording because of the wild joy that's present in the performance, even though it's a song of sadness and exile. That's the power of music, to give us, if only for the space of a song, a little victory over our own estrangement from the world. When I heard that recording, I knew I wanted the story of what happened to the Bikinians to figure into the album in some ways, but most of all I wanted the record to explore and live in that strangely and beautifully charged emotional moment."

This sense of estrangement from the world is a theme Meiburg and his bandmates have explored over the course of what's now being called the triptych – 2006's Palo Santo, 2008's Rook, and Archipelago – and the nature of the music has become increasingly dramatic. This evolution helps to place the local group along the continuum of the Romantic Age, using its chosen form of musical expression to situate man problematically yet hopefully on the landscape, wrestling with and struggling to interpret the sublime.

"I'm just trying to do the best I can to make sense of my own experiences, some of which have been pretty bizarre," Meiburg concludes. "I feel very lucky to have seen the things I've seen."