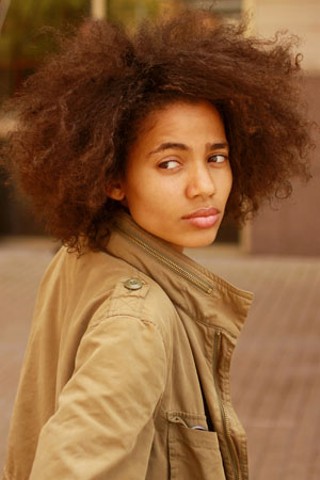 
Late and limping due to an undisclosed leg ailment, Nneka – pronounced "neck-a" – and her crackerjack fourpiece weren't about to sit down on the job. Looking slight in a fatigue jacket and tie-dyed pants, the neo-soul chanteuse quickly won the decidedly undersized crowd over with singsong flow. Mixing tracks from her U.S. debut, Concrete Jungle, and earlier recordings, she delved into the psalm-like "Africans" and followed it with a lecture on love, corruption, and racism before hitting the crowd with her dramatic "The Uncomfortable Truth." "If you're inspired, cool – be inspired," Nneka said succinctly, and the audience took her at her word. The band kept things bubbling with a mix of Booker T-worthy organ, dubbed vocals, and a dose of African rhythms and dubstep baselines. The singer introduced "Kangpe," yet another single off Concrete Jungle, defining the title as "spiritual strength, to step over spiritual obstacles," and when it came time for the Wesley Williams' rap found on the album, her exceptional bassist and backup vocalist Gros Ngolle Pokossi launched a scat that revealed the depth of talent Nneka has assembled around her. With the older "VIP," she vowed that corrupt powers – government and oil companies – would be known as "vagabonds in power" as she led the crowd in a strident sing-along. She may be wounded, but Nneka left no doubt that she's very much awake.