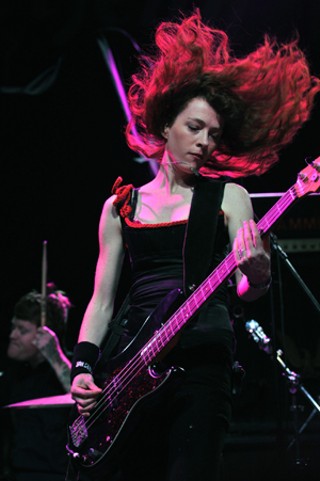 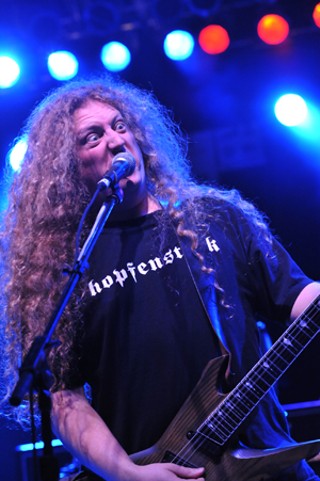 
A do-over, a tribute, and a raw rock survivor brought three faces of rock to the Austin Music Hall on Wednesday. Melissa Auf der Maur's 2009 SXSW set was impaired by a reedy mix that swallowed her luscious, soaring vocals. While many are still laying bets on either car crash or victory for her former band Hole's Friday night SX showcase, this year she laid out her art-rock agenda from the first quivering and sensual notes of "Lightning Is My Girl." As a birthday treat to herself and a tribute to all the bassist/vocalists (especially this year's ubiquitous rock god, Lemmy), she tore through a ramshackle but ebullient cover of Thin Lizzy's "This Is the One," but it was a world away from the grand and soaring material she debuted from her upcoming release, Out of Our Minds. Fellow Canadians Voivod followed with the clean, complex thrash that has been their hallmark, but also a note of sadness. This was among the final dates ever for the metal veterans – frustrating, since the epic "Global Warning" from 2009's Infini proved they were still capable of rewriting the rules. The stop-start gear changes of the group's classic "Nothingface," by turns speeding and grinding, demonstrated they were always innovators. Chins may have doubled as the years have progressed, but the math-metal they innovated before there was math-metal shone like a furnace. That only left room for rock of the most raucous kind, courtesy of Michael Monroe. All high heels and peroxide hair, the mic-swirling, sax-screeching glam-metal godfather and his goodtime gang stamped, stomped, and grinned. The audience screamed along as he laid out the options for the evening – "Dead, Jail or Rock'n'Roll." There was no doubt which won. Rock on, oh high-cheek-boned one.