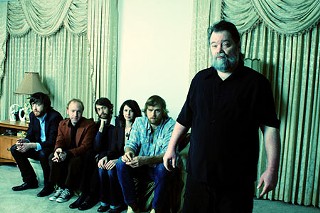 
With all due respect to the Grateful Dead, the saga of Roky Erickson is the longest, strangest trip in rock & roll history. The abridged version opens with the levitating glow of Erickson's 13th Floor Elevators and the bloom of psychedelic music, a promise truncated by the frontman's harrowing tenure at Rusk State Hospital. His long-awaited collaboration with Austin's indie rock stalwarts Okkervil River, True Love Cast Out All Evil (Anti-), due in April, culls ghosts from Erickson's vast unreleased archives.

"Roky's been to places, physical and psychological and spiritual places, that we're lucky we don't have to go," observes Okkervil's Will Sheff, True Love's producer and artistic director. "I was fascinated to hear him tell his story, unprompted, through these songs. The low fidelity and scratchiness of the recordings made them seem even more magical and strange, like it happened in some sort of alternate dimension. I wanted people to have that same feeling that I did when I first heard these songs."

The project dates back to a collaboration at the 2008 Austin Music Awards, known locally as Rokkervil. Sheff hand-selected the songs for the album from more than 60 original demos recorded over Erickson's career, some of which appear on the album, along with audio culled from home movies provided by Keven McAlester, director of the essential 2005 Rok doc You're Gonna Miss Me. The two camps rehearsed the material as if performing for an invisible audience, then recorded it live in the studio. True Love Cast Out All Evil isn't the sound of the pyramid meeting the eye – more like an excavation dig, revealing the depth of Erickson's torment and undiminished compassion.

"I think he had something that he needed to get out of him," Sheff reflects on the recording for the album, which also features members of local Latin juggernaut Grupo Fantasma. "There were moments where I would watch him and he was sort of channeling energy through the sky coming through his fingertips. It was really powerful." – Austin Powell