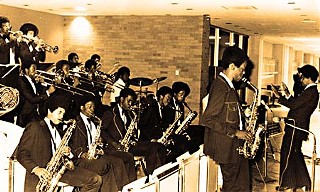 "I got everybody in the band but the devil on tambourine," Miles Davis proclaimed about sessions for 1972's On the Corner. At the same time down in Houston's Fifth Ward, bandleader Conrad "Prof" Johnson, an alto saxophonist and composer, was fusing big band-era jazz with hard funk and dynamite R&B, with an even larger and more impressionable cast: the Kashmere Stage Band. Kashmere High School not only swept the competition circuit, winning two national championships and an unprecedented 42 regional titles, but cut eight records of break-heavy orchestral funk, which ultimately resulted in Now-Again Records' essential 2006 compilation, Texas Thunder Soul 1968-1974.

"It was a time when the civil rights movement and R&B was hot," recalls Greg Garlow, an adjunct professor of government at Austin Community College, who played trumpet in the band from 1966 to 1969. "Prof recognized that and found ways to incorporate it into the music. He demanded discipline and respect and held to his standard of excellence."

More than three decades after graduation, about 25 other former members of the band reunited to pay tribute to Johnson in February 2008, an event beautifully captured in the inspiring new documentary Thunder Soul, helmed by producer Mark Landsman (see "Kismet in Kashmere," Screens). "That was one of the great experiences of my life," Garlow beams. "Most of us had not played together before. We were in different classes, but we'd all been trained a certain way by Prof. It all just fell into place." Thunder Soul premieres during the South by Southwest Film Festival at the Paramount Theatre on Saturday, March 13, at 11am, with an encore screening at Alamo Drafthouse South Lamar on Monday, March 15, 6:45pm. Shortly thereafter, the Kashmere Alumni Stage Band, in its only local appearance, blows the roof off the Chronicle's annual Film Bash at La Zona Rosa with T Bird & the Breaks. Register to win a pair of tickets at austinchronicle.com/contests or be the first to send the correct answer to the following question to offtherecord@austinchronicle.com: For what song did DJ Shadow sample the Kashmere Stage Band's theme, "Kashmere"?

Strange Beauty proved the perfect title for saxophonist Tony Campise's final album from 1995, encapsulating the tranquil poeticism and mercurial warmth of his bebop and ballads. The local jazz giant died on Sunday morning at University Medical Center Brackenridge, not long after suffering a brain hemorrhage. Campise, 67, had undergone three brain surgeries and been in or near critical condition since hitting his head outside a Corpus Christi hotel before his scheduled appearance at the Texas Jazz Festival in October.

A Houston native, Campise got his start with the Stan Kenton Orchestra before moving to Austin in 1984. He became one of the most prominent figures in the local jazz community, collaborating with both the Creative Opportunity Orchestra and local avant-garde collective Brown Whörnet, along with backing artists such as Ella Fitzgerald, Isaac Hayes, and Lyle Lovett. His breakthrough, 1991's Once in a Blue Moon, on which he also played flute, was nominated for two Grammys.

"It's a monumental loss, not just for Austin but the jazz community at large," relates fellow saxophonist Elias Haslanger, who played in Campise's big band ensemble. "He was everything you would want a mentor to be – warm, open, and welcoming – and at one time the undisputed king of jazz in Austin and really in Texas. He had that way of bending notes and playing them in a way that took you back to the Thirties and Forties.

"He had a sound that was larger than his life."

A memorial service will take place at Riverbend Church on Sunday, March 14, 2:30pm.

Rolling Out the Red Carpet

• Jack White isn't scheduled to attend the U.S. premiere of The White Stripes: Under Great White Northern Lights at the Paramount Theatre on Friday, March 12 – the Dead Weather storms Australia soon after – but his Third Man Records is setting up shop at Frank (407 Colorado) for the entirety of the SXSW Music Fest. The indie label screens the concert film on Wednesday, March 17, and sells vinyl exclusive to each day, including the reissue of Jon Wayne's cultish Texas Funeral on Thursday, March 18, and White's wife Karen Elson performs an exclusive engagement on Saturday, March 20, at 7pm. Third Man's latest signee, the Queen of Rockabilly Wanda Jackson showcases at Beauty Bar/Palm Door on Wednesday, March 17, at 8:30pm.

• Motörhead road warrior Lemmy Kilmister is fielding questions after the world premiere of LEMMY at the Paramount Theatre on Monday, March 15, at 6:45pm. Consider it a sound check for his official SXSW interview and Austin Music Hall showcase on Wednesday, March 17.

• Immediately preceding the Johnny Depp-narrated When You're Strange: A Film About the Doors at the Paramount Theatre on Friday, March 19, is a panel discussion of the same name (2pm, Room 19A) that will feature the Doors' voodoo doctor, guitarist Robby Krieger.

• Screening at the Alamo Ritz on Thursday, March 18, 9:30pm, Beyond Ipanema explores the recurring influence of Brazilian psychedelic music on modern artists. The documentary features both tropicalia legend Gilberto Gil – gracing Hogg Auditorium on March 23 and 25 – and the country's latest export, the unsigned Garotas Suecas, which hits the Beauty Bar Backyard on Friday, March 19.

• Like a guitar pull at the revered Houston venue, the screening of For the Sake of the Song: The Story of Anderson Fair at the Paramount Theatre on Wednesday, March 17, 4:30pm, will be attended by boosters Carolyn Hester, Slaid Cleaves, Shake Russell, and Gurf Morlix, who composed the documentary's original score.

• Texas Music Extravaganza captures the Texas Tornados' full-force live set last year in San Antonio and screens Sunday, March 14, 8pm, at Antone's, followed by live performances from the Raul Malo Band with Augie Meyers and hot new locals the Trishas, plus opener Adam Aguilar. Pick up tickets prior to the event at the club. Free.

• After the official screening of The Weird World of Blowfly on Saturday, March 13, at the Alamo Drafthouse South Lamar (9:30pm), Clarence Reid's estranged, blaxploitation alter ego breaks a cold sweat at Beerland, alongside locals Foot Patrol and Beloved Binge.

• The red carpet for The Runaways at the Paramount Theatre (Thursday, March 18, 8pm) might be the closest thing yet to an actual reunion from the all-female punkers, featuring appearances from both Joan Jett and Cherie Currie, and their doppelgängers, Kristen Stewart and Dakota Fanning, respectively. An advance screening earned rave reviews across the board here at the paper. See Film.

• Congrats to onetime local wrangler Ryan Bingham (see "The Cowboy Song," June 5, 2009) and T Bone Burnett, who took home Best Original Song at the Academy Awards on Sunday for the Crazy Heart theme "The Weary Kind." Likewise, in his acceptance speech for Best Actor, Jeff "Bad Blake" Bridges thanked Stephen Bruton "for bringing all that great music and those wonderful musicians to the party." The celebration of Bruton's legacy continues with a special tribute from the Texas Sheiks at the Austin Music Awards on Saturday, March 20. On that note, Raul Malo and Johnny Hernandez, brother to Little Joe of La Familia fame, have been added to the AMA's Midnight Jam, anchored by Black Joe Lewis & the Honeybears and Blues Boy Hubbard.

• Local alt-rock act Alpha Rev makes a guest appearance on ABC's Greek on March 15, performing a cover of Simple Minds' "Don't You (Forget About Me)" as well as the title track to its Hollywood Records debut, New Morning, due April 20.

• Slap on the wrist: 500 SXSW Music wristbands go on sale at Waterloo Records beginning Saturday, March 13, $165 each. One per person, and they must be put on at time of purchase. More will be available at various SXSW venues beginning Wednesday, March 17. See wristband.sxsw.com for updates.