Ascendence big or small always feels somewhat anti-climatic in the face of a debut EP, especially since the Yeah Yeah Yeahs punch of Jenny Gacy's girlie vocal omnipresence and, the post-blues sci-fi licks of guitarist Jonas Wilson (aka Deluxe Peroux) on future's-so-bright opener "Space Invaders" are strictly big league. "Heresy" follows like the other half of a double A-side 45 with an even bigger sound – a main-stage sound – atop which Gacy's candy vocals swirl with peppermint-striped insouciance. Then the White White Lights hit the trifecta, "It's Cold Here in Japan" marching dreamily through Lost in Translation melancholy, Gacy again with a voice (and live stage presence) from a French film – ready for your projection. The second half of Medium Head Boy is then the B-side, "Doctor Doctor," "Evangeline," and "Devil's Son" getting rootsier, moodier, in the heated slide of the first tune, piano syncopated Southern evocation of the second, and even the fun-house frenzy of the last. Full speed ahead, boys – and girl. 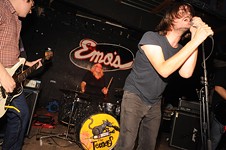