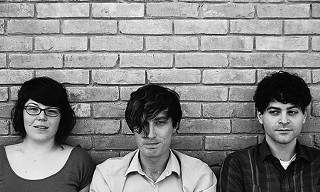 Guitarist Andrew Burr holds two fingers to his temple to illustrate the meaning behind Woven Bones. "It's my cryptic way of saying 'fingers crossed,'" Burr says with a devilish smirk, his wavy dirty blond hair covering his right eye. "You know, for luck."

Since forming under the wings of the Black Angels in late 2008, Woven Bones has had nothing but good fortune. The band's issued three 7-inch singles of grimy pop nihilism, each more abrasive and difficult to come by than the one before (some go for close to $80 online). The band's 12-inch EP, The Minus Touch, released last year by Dum Dum Girls' Zoo Music, is a searing witches' brew of the Cramps' graveyard pollution, the Stooges' punk smear, and the Jesus & Mary Chain's distortion.

"We just like rock & roll," Burr contends. "I'm really focusing on keeping things short and sweet. I definitely appreciate pop songs, and I want the hooks to be strong, like Jonathan Richman and Phil Spector. It's so infectious."

Woven Bones is also featured on Matador's Red River pileup Casual Victim Pile and recently solidified as a threepiece with the addition of former Pillow Queens drummer Carolyn Cunningham. Coinciding with a tour accompanying the Fresh & Onlys, the band's debut full-length In and Out and Back Again, for Chicago's esteemed HoZac Records, drops in May and perfectly casts the Bones' motorcycle drive-by: Matty Nichols' crawling basslines and Cunningham's tribal, stand-up percussion laced with Burr's distortion tirades and yelping sneer.

"All of the sound you've gotten out of us before is there, but it's captured with more fidelity," Burr says of the album. "We all know the value of what Woven Bones has in front of us. We're not getting any younger. We need to try and man up and do all that we can do before something passes us by."