After a rally on the West Mall that featured appearances from Scrappy Jud Newcomb, David Garza, and Texas Rep. Elliott Naishtat, the Texas Union board decided on Friday to postpone any decisions regarding the Cactus Cafe until April 30. Along with fielding some questions from students and community activists, the board addressed proposals presented by the Student Events Center and the Student Friends of the Cactus Cafe (discussed at length here last week) as well as a third proposal by students Taylor Steinberg and John Meller. Following a motion made by Student Government President Liam O'Rourke, the proposals were sent to the office of the vice president for student affairs, Juan González, for further evaluation, but there's still some question as to what exactly that process entails.

If history is any indication, it's not coming back out.

As documented by the 1999 film University Inc., the steps thus far taken to "repurpose" the Cactus are the exact same as those that led to the closing of the Texas Union Film Program and the removal of veteran film booker Steve Bearden in 1998.

"[University Unions Executive Director] Andy Smith came before the board, announced that there was this alleged budget shortfall, and recommended that the Union Theater be closed," recites director Kyle Henry, a lecturer in UT's College of Communication. "There was no discussion before that with the students. The budget shortfall that was put forward billed the expenses against the box office for the program, without taking into account the student fees, which were supposed to subsidize programs like that."

Mirroring the work of the Student Friends of the Cactus Cafe, students formed the University Film Society and submitted a detailed, 20-page Proposal to Retain and Explore Redevelopment of the Texas Union Film Program to then-Vice President for Student Affairs Dr. James Vick. It fell on deaf ears. "It's a little surreal and depressing to stand here with all of this construction going on, and money floating around this university, and then see that this one little comparatively tiny cultural aspect is being singled out as expendable," charged renowned local filmmaker Richard Linklater at a 1997 West Mall rally (see "The Last Picture Show," Jan. 23, 1998).

Intensifying the political déjà vu of Linklater's sentiments, last month the board of regents approved an $11 million renovation project for the Texas Union. Smith's salary, meanwhile, has more than doubled since 1997, from $65,000 to $138,603.

Citing the now familiar refrain of a "budget crisis," Smith also pushed for the privatization of the Union in the early 1990s, a move that effectively replaced the Union Dining Services (and its full-time employees, eligible for benefits) with corporate franchises such as Wendy's and Taco Bell, overseen by Aramark. After a landslide student referendum against privatization – The Daily Texan comic Fire Andy Smith was quite popular at the time – Vick, Smith, and then-UT President William Cunningham unilaterally overturned the decision.

As evidenced in documents obtained by The Texas Observer (see "UT Cuts: Framing (and Reframing) the Message," News), Smith made the decision to shutter the Cactus without soliciting student or community input. At the board meeting he referred to the Cactus' $66,000 budget shortfall as an annual loss, despite documentation proving it's per biennium. When asked via e-mail if the Texas Union board would get to vote on the proposals on April 30 or if his office would be making the decision, González avoided answering the question.

"If there are promising options we will outline those options to the Board," González wrote. "We anticipate over the next 60 days to be able to identify common elements and strengths of each proposal that align themselves to having students operate the Cactus."

The leader of Austin's current U-18 (under-18) flock, Mother Falcon has been tapped to showcase at the annual Austin Music Awards, capping off South by Southwest at the Austin Music Hall on Saturday, March 20. Surprised? Just wait for this impressionable large band ensemble to take flight. On debut EP Still Life, Mother Falcon bridges the neo-classicism of Andrew Bird and Beirut's baroque pop behind the prodigious exuberance of bandleader/multi-instrumentalist Nick Gregg. Newly slotted in as well are Will Sexton and some as yet undisclosed friends. And as previously announced, the celebration also stars a special tribute to Austin's late great Crazy Heart, Stephen Bruton, by Geoff Muldaur's Texas Sheiks, and sets by Grammy-nominated Sarah Jarosz, the Explosives featuring Moby Grape's Peter Lewis (more on that next week) and Creedence Clearwater Revival's Stu Cook, plus soul-shouters Black Joe Lewis & the Honeybears featuring Blues Boy Hubbard, who are leading the show-closing all-star jam.

A Brief Look at SXSW Panels of Note

Hotels are a rare luxury during SXSW, which only bolsters the local appeal of Better Than the Van, an Austin-based networking site that connects touring bands with individuals offering up a place to crash. "Our traffic is definitely up," relates site co-founder Todd Hansen, who's moderating a Music Fest panel, Friendbase to Fanbase: Why You Must Tour Now! on Thursday, March 18, at the Austin Convention Center. "Hopefully we can provide some tips for bands that aren't quite sure how to get on the road and develop more interpersonal connections." The site is giving away a tricked-out van full of music gear to commemorate the occasion (www.betterthanthevan.com).

Orlando hip-hop outfit Solillaquists of Sound, which hits Mohawk Monday, March 8, is taking a similar approach for its current tour, relocating locally for the remainder of the month (learn more at "No More Heroes," Earache! Music blog, March 4).

Finally, accompanying the Music section's SXSW panel tech package this week, here's a handful of highlights at the Convention Center from the Festival's business end.

Label founders Mac McCaughan and Laura Ballance shed light on Our Noise: The Story of Merge Records: The Indie Label That Got Big and Stayed Small on Thursday, March 18, with Michael Azerrad moderating. The Superchunk duo also plans to tear out a few pages at BookPeople the day before (6pm), performing covers of songs mentioned in the book.

After archaeological dig Texas Nuggets: 1964-1967 on Saturday, March 20, original garage rockers Kenny & the Kasuals and the Novas, among others, excavate the past with a coinciding showcase at the Continental Club. 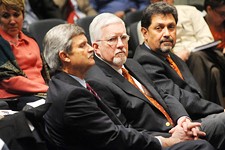