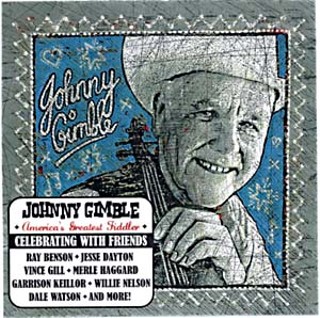 
He may be nearing his 84th birthday, but Johnny Gimble is proof that music can keep you young. Affectionately produced by Asleep at the Wheel's Ray Benson, Celebrating With Friends is a straight shot of the hot jazz and Western swing that the fiddle great is known for and, as the title suggests, with an impressive lineup of guests: Willie Nelson, Merle Haggard, Vince Gill, Dale Watson, the Wheel's Jason Roberts, Jesse Dayton, and Garrison Keillor. That doesn't prevent Gimble's granddaughter Emily from nearly stealing the show with a sultry reading of "If I Had You." Watson's smooth rendering of "I Needed You," a song Gimble co-wrote with Bob Wills – Gimble was a Texas Playboy off and on from the 1940s into the 1960s – will have you sighing gratefully. Excellent musicianship, admirable vocal performances, and judicious song choices make Celebrating an early leader for best traditional country record of the year.

Johnny, Dick, and Emily Gimble
A Case of the Gimbles (Record Review)

King of the Swing Fiddle
Johnny Gimble, 60-plus years of music history and good fortune