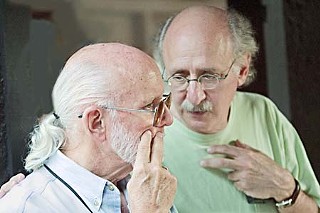 "I had no idea I was going to live to be this old," chuckled Rod Kennedy on Friday, his 80th birthday. "It's amazing, especially being in the music business." Judging only by the numbers, the Texas music luminary has had a Hall of Fame career, producing more than 1,500 events, including the Longhorn Jazz Festival and Kerrville Folk Festival, which he founded in 1972 and spearheaded for more than three decades. By his count, he heard 30,000 songs as the head of the Kerrville New Folk competition, an event that helped launch the careers of Lucinda Williams and the Dixie Chicks, among countless others. "I could tell what was going on in the world just by listening to the music," Kennedy concludes. Yet numbers only go so far. Kennedy helped establish KUT and founded the Texas Association of FM Broadcasters, along with operating the Chequered Flag club, which provided a platform for then-emerging songwriters such as Townes Van Zandt and Jerry Jeff Walker. "The Kerrville Folk Festival has definitely been a huge part of my life all these years," reminisced Butch Hancock, who appeared with the Flatlanders at the first festival in 1972 after Peter Yarrow heard the group performing outside under a tree. "It was always delightful, and Rod always kept it going." The Flatlanders return the favor on Tuesday at the Paramount Theatre for "Music From the Heart," a special tribute to Kennedy that benefits the Center for Texas Music History at Texas State and features fellow Kerrville alumni Robert Earl Keen, Ruthie Foster, and Jimmy LaFave, among others. "The loyalty of the artists, that was always the thing that really surprised me," echoes Kennedy. "Hopefully I was an effective, enlightened dictator over those years."

If only in spirit, Spoon's triumphant performance at the fenced-in parking lot of Waterloo Records on Monday afternoon recalled the Beatles' final rooftop appearance as spectators lined the streets and rooftops of neighboring buildings to catch a glimpse of the band's lone homecoming engagement. Austin's Fab Four rewarded the capacity crowd in kind with a stripped-down, hourlong set that complemented the staggered strut of "The Mystery Zone" and throttling rattle and hum of "Nobody Gets Me But You" from the recently released Transference. Frontman Britt Daniel was at his most casual and confident, digging deep into the group's catalog for the piano-soul of "Me and the Bean" and swaggering Kill the Moonlight rarity "Something to Look Forward To" and vicious encore closer "Jonathan Fisk." "I haven't been in Portland for two months," he remarked at one point, defending his Austin ties. "There's a reason for that."

Wolfgang Gartner believes there's a "strange phenomenon" in the DJ world: "The city you live in you tend not to play in as much." That theory certainly holds true for the 26-year-old Austin transplant, born Joey Youngman, the only local artist aside from Spoon to make the cut this year for Coachella. Despite spinning at gigs around the world, including a current Australian tour, not to mention releases on notable house labels Tango, Om Records, and Naked Music, the electro-house specialist has rarely gigged locally, citing a variety of factors, including a general lack of attendance and poor promotion. That's unfortunate considering his recent remixes for MSTRKRFT ("Heartbreaker") and Tiesto ("I Will Be Heard") and Fire Power/Latin Fever, his latest in a string of EPs that hits as hard and low as Justice. "I usually fly out on weekends and hibernate in the studio during the week," Gartner reveals. "I'm actually starting to be a draw. Whereas before I was getting booked and people were coming out just because of the club and the night, now people are actually coming out to see me."

Stepping into character might be a stretch, but the soundtrack to Ernest, a forthcoming indie horror film, should come easily to Scott H. Biram ("One in a Million," Dec. 16, 2005). The local hellraiser has been cast as the lead – a truck-driving serial killer – and recently wrapped filming of a demo short in Tennessee. "It was 16 degrees the whole time we were shooting," shrugs Biram, who hits the HighBall on Sunday before leaving for another West Coast tour. "It wasn't as bad for me as it was for the girl in a miniskirt hanging by her wrists inside the barn." The Dirty Old One-Man Band is also the subject of a new import-only, hardbound comic, My American Diary, which documents his tour through the watering holes and barbecue dives of Central Texas with illustrator Nicolas Moog. "I wish I knew what it said," cackles Biram of the comic, which also features fellow travelers Tom VandenAvond, Possessed by Paul James, and Ralph White. "It's all in French."

• While not featured prominently onscreen, Charlie Sexton assisted Justin Timberlake and newcomer Matt Morris on guitar for an immaculate reading of Leonard Cohen's "Hallelujah" on Friday as part of the all-star "Hope for Haiti Now" telethon, which raised close to $60 million and is available for download via iTunes. Two nights later, the Arc Angel and Dylan sideman closed out the 10-hour Help Austin Help Haiti marathon at the Austin Music Hall with an emotional cover of the Beatles' "Help." No exact figures from the show are available, but the auction alone raised $20,000 for the cause. Antone's keeps the benefit ball rolling on Sunday with Del Castillo, Carolyn Wonderland, and Susanna Choffel.

• The White Stripes' concert documentary Under Great White Northern Lights, directed by Emmett Malloy and corresponding with an official live album, will have its stateside premiere at the South by Southwest Film Conference – fitting, considering the Detroit duo ravaged Room 710 at SXSW 2001. No word yet on whether or not Jack & Meg will make an appearance, but this would be a good time to cash that IOU from ACL 2007.

• On May 30, Augie Meyers ("High Texas Rider," Oct. 30, 2009) turns 70, which would be a celebratory occasion under different circumstances. The Vox maestro, whose latest with the Texas Tornados, Esta Bueno, drops in March, is in need of a kidney transplant and on regular dialysis, but after his birthday, he will no longer be eligible for the kidney donor list unless someone donates one specifically for him. Any interested parties should contact Diane Tarpey at San Antonio's Methodist Specialty and Transplant Hospital, 210/575-4483.

• Austin's premier heavy metal parking lot, Snake Eyes Vinyl (1101 Navasota), is closing. The specialty shop, which moved to its current location in August 2008, is currently hosting a liquidation sale, and a final in-store send-off is scheduled for Feb. 6. "Four years is a good run," relays owner Rebecca Hubinsky, who decided not to renew her lease and instead go back to school to study business and accounting. "I just decided to not take a risk."

• Don't forget: Ballots for the Chronicle Music Poll must be submitted or postmarked by the end of Friday, Jan. 29. Speak now or forever hold your peace.