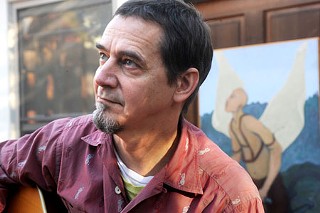 "You know, you take a pencil and you make a dark line, then you make a light line, and together it's a good line."

That line from Wings of Desire is spoken by Peter Falk, who plays himself in German director Wim Wenders' 1987 film about angels in existential crisis. He's telling one celestial being named Damiel how good it feels to be mortal, to lie, to experience a range of emotions.

"To smoke and have coffee. And if you do it together, it's fantastic."

Standing in Lee Barber's living room as he explains how the painting on the cover of his 2009 debut, Thief and Rescue, came together, that line came to mind. The dark and the light are in that image, if you stare long and hard.

"I started with something abstract, like a cloud," he says, staring long and hard. "I drew a few random lines, two figures, then added some random splotches of paint. That's how they start. Then I looked at it, tried to find the faces. I saw this face, then I saw the beast."

Why are their faces covered?

"I think ... masked figures can transcend the physical. You see there's something like a fire behind these trees? They're running away from whatever that is. He's either stealing it or rescuing it, which is why I called it Thief and Rescue, but either way, it's an ambivalent action. He's saving the creature."

Barber communicates with his hands, whether painting, playing guitar, or as a draftsman, his day job. Talking in the kitchen of his South Austin home, he twirls a pen in his fingers, spins it on the table, concentrates on it like he's trying to find words or figures.

"I do approach music in a physical way," drawls the 53-year-old local, with a hint of Cajun accent. "I know I'm finished when there's nothing else I can do. It has to have a completeness."

That ideology helped birth Thief and Rescue, self-released last fall but written over the span of several years. It's his first solo album, so it strips off years of bad and good road, Barber's voice low and steady as the narrator, Lou Reed of the bayou. Blues horns, snaking guitars, and hushed percussion accent Thief: It's a subtle album, filled with pinewood floors, crows, and other Delta emblems. It's Barber putting himself out there at middle age, when he felt ready.

Producer and Glass Eye bassist Brian Beattie became his co-captain for the recording, helping Barber sketch out his vision. It felt right, Barber seeing parallels between the way Beattie approaches recording and the way he approaches painting.

"It's all about making the colors work in a relative way, to make it sing and come together in a focused way," waves the painter. "It's all about balance."

Barber enlisted Beattie to play bass, Craig Ross to play guitar, and longtime collaborator Jon Greene to play drums, bringing in top-shelf Austin as well: Will Sheff, Amy Annelle, Matt the Electrician, and James McMurtry's son Curtis to name a few. He also asked his 18-year-old son, Wells, who played drums in local teen band the Diving Captain, to contribute, and some of his friends played horns. Barber bartered with several musicians on the album, his paintings for their time.

Paintings – all his – adorn the walls of Barber's living room. Perhaps the strange, colorful figures made their way into his songs. Maybe they're just visiting. I wonder aloud about the bird theme in his art and lyrics.

"Birds represent visitation, maybe a window to a parallel reality," he muses. "Or a spiritual reality, even though I don't like to use that word."

Barber was born in 1956 in New Orleans, where his father was attending seminary. He became a Southern Baptist preacher, so Barber spent much of his childhood in Baton Rouge and, for a short time, Mississippi. He spent a lot of time in church and eventually took to singing in choir, an environment that no doubt fostered his talents. He paints a picture of life along the Mississippi that could be a Tom Waits song.

"In the Sixties in Baton Rouge, long before they started thinking environmentally, the air could be pretty terrible, with the Exxon refinery and the chemical plants. If the wind was blowing the wrong direction, it could be nasty."

His father preached on into his high school years, though Barber states it wasn't a "fire and brimstone" affair, and he wasn't restricted with music.

"There's that wonderful inclusive Cajun tradition," he adds, "where kids and old folks and everyone's dancing, you know, freely. My parents loved music, but that kind of thing was sort of a conflict for them. They stuck with the Andy Williams records."

Those Andy Williams records stuck with him, too, and he became fascinated with singers and singing. At 16, he came across a Leonard Cohen songbook, saw the light, and learned to play the songs. He still does "Suzanne" once in a while.

"Neil Young's After the Gold Rush was [an inspirational album]," he continues. "My sister brought it home when I was about 15. I think the raw emotional commitment in the singing and the presentation hit me right from the beginning. I'm still moved by songs like 'After the Gold Rush,' 'Don't Let It Bring You Down,' 'Birds,' and 'I Believe in You.' In the voice there is no doubt the guy cares deeply, that, with words and music, he's reaching for or trying to reveal something that is hidden and true."

In the late 1980s in Jackson, Miss., he started gigging with the Barbers – him on guitar; his wife, Elaine, on harp; and Bruce Golden on percussion. A few years later, the Barbers, minus Golden but plus their young daughter, Hedda, moved to Austin. They put out two folkie, experimental albums: 1997's self-titled and 1999's You Know How It Is, the latter recorded by Beattie. Then, Barber didn't play for a while.

"I know there's that place, the place you go to find a song," he states, staring at the pen. "And I didn't look in that corner for a long time. You know, that corner where you find stuff? But when I've got music in my hands and things are rolling around in my head ... well, it's only natural." 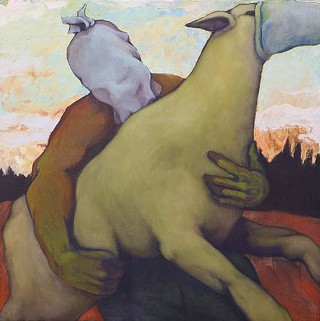 Thief and Rescue, by Lee Barber

The collision of fate and nature caused Barber to look in that corner again. In August 2005, just as his 25-year marriage to Elaine was ending, Hurricane Katrina was descending on his beloved city. The pain is illustrated with all five senses on "1000 Miles":

The fire has reached the birdhouse now

All smoke and silver curls

If you ain't got nothin' good to say

That's what our public servants say

When they read the news

And I feel like I'm a thousand miles from you

"That song took me to a real emotional temperature that I'd never reached before," Barber says. "In some way, it's kind of the heart of the record."

There's levity among Thief and Rescue's more emotional temperatures, and Barber's talent as a storyteller cools off songs like "Broken Cup" and "Gloryland Bus Driver." "The Monkey and the Ass" brings a bit of Cohen-esque reverence to the album, the poetry of longing: "There's so much to forget, misplace, between the monkey and the ass. The nights we slept on sheets of glass, until you called it over. But I'll remember the perfume, the ceremony in your room, when we were young as lovers."

If "1000 Miles" is the heart, closer "Let's Get Lost" is the release, done in one take and climaxing in a surge of guitar. Barber was going for "the pure sensory, in-the-moment experience with no details or footnotes attached." He succeeded.

Since the album's come out, Barber's gigged locally with his band the Broken Cup – Greene on drums, Beattie on bass, and Scrappy Jud Newcomb on guitar. Every Saturday in January (concluding this Saturday), he's played low-profile gigs with Scrappy Jud at the Whip In down South, on a small stage where you can't escape the smell of incense and curry. Despite his admittedly introverted demeanor, onstage he's allowed to be someone else for a little while. Some artists have a distinct process they go through to create. Barber knows an idea's arrived when his hands start moving.

"Trying to arrange a group of words is a very mysterious thing that can become magical," he reflects. "Just a group of words. That's what attracts me to the whole process. Words can be very sensual; they're like a color."

A few days later, he leaves this postscript in my e-mail inbox, which brought back that Peter Falk line:

"I'm telling lies with painting. I'll make the hand a deep blue, or the sky acid orange, to dislodge it from the static, to animate it. The same thing is happening with words. I'm telling lies in an attempt to document something that is not static, namely life."

"A thoroughly spiritual record where breath and words combine in ways that transcend. A great example of songs that can't be explained but that make perfect sense."

Otis Redding, "I've Been Loving You Too Long"

"To misquote Bill Clinton, 'It's the emotion, stupid.'"

"An overlooked album that's intimate and playful, with great singing throughout. This isn't the overplayed Dylan cartoon character!"

Captain Beefheart & the Magic Band, Lick My Decals Off, Baby

"Underrated as a singer, an incredible vocal range and ear for phrasing genuinely poetic images. Less cerebral than Zappa."