Just when you thought the Hickoids were putting their tattered boots up and relaxin' following the reissue of Waltz a Crossdress Texas, they uncork the five-song Hairy Chafin' EP. It's irresistible hokum from the Lone Star State's finest purveyor of hard corn-punk, lifting the Velvet Underground's ubiquitous banana cover for art. Peel it slowly, and pop goes the ear. "Cool Arrow" is core axis Jeff Smith/Davy Jones' tip of the shredded straw hat to Augie Meyers, pure San Antonio Chicano rock. Meyers is prominently featured in the Texas Music Extravaganza, filmed last year at Leon Springs Dancehall in San Antonio with a dazzling cast of performers playing tribute to the music he and Doug Sahm made. It's an impressive lineup, starring Shawn Sahm, Flaco Jimenez, Raul Malo, Vato Valley Boys, BCH with Byron Berline, the Krayolas, and Adam Aguilar. The extravaganza redefines contemporary Tex-Mex not only through Sahm's and Meyer's music ("She's About a Mover," "Dinero") but by the musicians they influenced (Raul Malo's "All You Ever Do Is Bring Me Down") and the songs that taught them ("Volver, Volver" à la Flaco). The DVD dances with visual flair, and the soundtrack preserves it. Larry Lange & His Lonely Knights are an Austin outfit expanding their Highway 90 swamp pop and paradise-by-the-dashboard-light belly-rubbers south to Bexar County. San Antonio Serenade gets on disc the sound Lange and his compadres have created in reviving classic Chicano soul S.A.-style, favorites known no farther than the shadow of the Alamo itself (Doc & Sal's "Laughing to Keep From Crying," Spider & the Playboys' "Tell Me Darling"), plus contemporary offerings (Oscar Martinez's "Whatsa Matter Con You," Jerry Butler's "Never Gonna Give You Up"). The Knights' secret weapon is Joanna Ramirez, whose rendering of "Poquita Fe" makes it a weeper of the first order. Whatever's gotten into the water of San Antonio, keep it there. 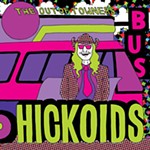