More people bemoaned the state of Austin radio in 2009 than actually listened to it. For years now, airwaves have been dominated by automated programming manufactured in an Orwellian fashion to meet general approval, formats flipping faster than Allen Iverson's retirement – an effect that will only be heightened next summer by Portable People Meters, Arbitron's new rating system (see "Media Watch," News).

Things got personal in May, however, when KUT cut the hours of longtime staples Larry Monroe and Paul Ray, sparking grassroots protest and an increasingly strong sense of communal disconnect. Then came the bombshell last month when Jody Denberg announced his retirement from KGSR, the adult alternative station he has embodied since its inception in 1990. Making matters worse, the outlet's frequency change to 93.3FM, which cleared the way for new Spanish-language station La Z on 107.1FM, cut several Austin areas out of the loop, including the far Eastside abode of yours truly, a part-time employee of Emmis Austin Radio.

"Honestly it was a bit of a surprise to us since we never had any complaints with the signal when it was Hot 93.3, and it did great in the ratings over the last few years," relates Scott Gillmore, vice president and market manager for Emmis Austin, who notes that KGSR is now available on the HD-2 channel of 107.1 and streaming online. "Our intention was to put the two stations in the best position to succeed in the future, and this gives KGSR the bigger signal, at least on paper. We suspect that we have some sort of problem up on the tower, and a crew is coming to evaluate it in January."

Meanwhile, Explosions in the Sky crowned its decade with a fireworks display at a sold-out Stubb's on the Fourth of July, even as Spoon – calculated recently by Metacritic to be the most critically lauded band of the Aughties – held court there for three consecutive nights mere days later. Hometown heroes Okkervil River and the Band of Heathens, not to mention Willie & the Wheel, helped commemorate the 35th anniversary of Austin City Limits, while over on the silver screen, Jesse Dayton walked with a zombie in Halloween II, Ryan Bingham backed Jeff Bridges in Crazy Heart, and Bandslam further fueled the ever-growing homegrown U-18 movement.

It was the best of times; it was the worst of times – the entire music industry doing more with less and for less. Locals took it upon themselves to develop new distribution methods, such as Coma in Algiers' Your Heart, Your Hangout campaign, and alternative revenue streams in lieu of label advances, most notably Jon Dee Graham's co-op and the Adopt a Song campaign by the Belleville Outfit. Waterloo Records and End of an Ear both established digital storefronts through ThinkIndie, as the resurgence of vinyl continued unabated, with an estimated 35% increase in total sales from last year, a trend seen locally in a spike of killer 7-inch debuts by the likes of Followed by Static, TV Torso, and Woven Bones.

Hands down the party of the year, the South by Southwest Music Conference reaffirmed itself as an invaluable promotional tool and pop-culture destination, crashed by the likes of Kanye West and Jane's Addiction and peaking with Metallica's exclusive guitar heroics at Stubb's. Despite heavy rainfall, both the Austin City Limits Music Festival and Fun Fun Fun Fest boasted record numbers and heavyweight headliners Pearl Jam and the Jesus Lizard, respectively, while the second annual Pachanga Latino Music Festival spiced up Fiesta Gardens in May.

Concurrent with the turbulent debate over public health care, more than 90 bands and 170 local businesses came together Sept. 22 to raise $164,000 for the Health Alliance for Austin Musicians – the homegrown nonprofit that provides low-cost medical and mental-health services to local artists – on the fourth annual HAAM Benefit Day, a fitting tribute to the continued legacy of the organization's beloved founder, Robin Shivers, who passed away suddenly in October. That's not counting the $53,200 raised in February by the 60th birthday bash for Marcia Ball, who brought home Pinetop Perkins' award for piano player of the year from Memphis' Blues Music Awards.

Elsewhere on the political front, things weren't so uplifting. Flamingo Cantina was tarred and feathered for closing during the annual Clyde Littlefield Texas Relays in April, citing safety concerns and an expected loss in revenue. Tensions on Red River boiled over two months later when Brandon and LaBaaron Hutchison of the Central Texas hip-hop outfit LG Allstarz opened fire outside of Spiros, wounding eight bystanders and resulting in the permanent closure of the club.

In April, City Council did its part to "clarify" the sound ordinance, turning down the volume of live music at restaurants to a laughable 70 decibels, a decision made effective immediately because the circumstances were deemed to "constitute an emergency." The move resulted in plugs pulled on both Freddie's Place and Shady Grove's longstanding Unplugged at the Grove series, though the latter was quickly revived by some political wizardry.

Council then rejected the Live Music Task Force's recommendation for the formation of a Music Department, creating instead a music program manager position within the Economic Growth & Redevelopment Services Office. That role was filled last week by Don Pitts, a longtime Gibson guitar executive who serves on the board of the Austin Music Foundation. He's just in time, too, given that rumblings about the Waller Creek Tunnel Project are starting to pick up again.

Looking back, 2009 felt less like the closing of a decade and more like the end of an era, not just for radio but for this city, South Austin in particular, which lost some of its most beloved musical icons, including Stephen Bruton, Randall "Poodie" Locke, avant-garde jazz pioneer Tina Marsh, cosmic soul man Rusty Wier, Amy Farris, Sky Sunlight Saxon, and poster artist Bill Narum – an emotional domino effect of painful loss. Even the Cornell Hurd Band, bereaved of Danny Roy Young and Paul Skelton, danced its last shuffle at Jovita's last Thursday, ending the longest-running residency in town. 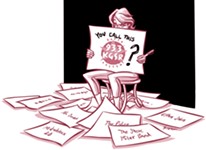