Slayer, Saviours, Baroness, Them Crooked Vultures, and Alice in Chains

Slayer's World Painted Blood (American) album of the year? Find one more convincing. Like a soundtrack to cinematic year-high The Hurt Locker, the follow-up to 2006's equally war-torn Christ Illusion ("Jihad") issues a total armored response to its predecessor's punker rototill. WPB rains lyric hooks and rhythmic breaks bursting at every turn from a jack-in-the-box of raging disillusionment. Titular first mantra ("world painted blood, no sanctuary") plus "Snuff" ("torture, misery, endless suffering") and "Beauty Through Order" ("God did not do this") match the industrial shifts of "Public Display of Dismemberment" and security breach guitars on "Human Strain." Funeral home of horrors "Playing With Dolls" ("you'll wish you were in hell") also names a 20-minute short on the deluxe edition DVD, Frankenhooker as soundtracked by World Painted Blood. Saviours' Accelerated Living (Kemado) gallops stronger, faster, meatier than the Sword-in-the-stone ballast of 2006 bow Crucifire and the heavier artillery of its follow-up on Kemado two years later, Into Abaddon. Guitars increase a thousandfold, Sonny Reinhardt teaming with Matt Pike Jr., aka lead shred and holler Austin Barber. Lightning tempo morphs (opener "Acid Hand") and straight 1980s riff fusillades ("We Roam") alight High on Fire only faster, "F.G.T." unleashing a pure blitzkrieg of tempo and guitar volley. Howitzer "Slave to the Hex" will blister air guitarists and drummers alike. Baroness continues in the footsteps of Georgian antecedents Mastodon, uncorking second album Blue Record (Relapse), which parallels its former labelmates' Remission as a breakout disc, although aquatic CD art and the seafaring rhythms of "The Sweetest Curse" and "Jake Leg" spray hot 'Lantic seawater à la Leviathan. The backwoods ambience fleshing out the group's eponymous 2007 debut – Red Album – deepens here on fraternal order chorals ("Steel That Sleeps the Eye") and connective tissue interludes ("Blackpowder Orchard") that set up epic riff armadas "A Horse Called Golgotha," with its Brian May solar flare, and "O'er Hell and Hide." Eponymous DGC platter by Josh Homme, Dave Grohl, and John Paul Jones – Them Crooked Vultures – piles up more kills than it probably has any right to. The rhythm section's heavy elasticity boogies Humble Pie even as the Queens of the Stone Age frontman flirts with Darkness. Lyrical carrion "I know how to be lost in lust, not because you should, but because you must" on lead-off "No One Loves Me & Neither Do I" speaks to the time constraints of spontaneity in the face of sleek muscle burst "Mind Eraser, No Chaser" and the Cream-y mucous of "Scumbag Blues." Far too much real estate ("Interlude With Ludes") abuts a back-end wasteland ("Gunman"), but riff jewel "Bandoliers" yields no quarter. Not only does Alice in Chains' Black Gives Way to Blue (Virgin) toll open with "All Secrets Known" and thus confirm that the Seattle warlords' vocal doom belonged as much to creator Jerry Cantrell as heroin casualty Layne Staley, but only the guitarist could bend the riff to "Check My Brain" into one of the band's signature staph infections. Rather than attempt a straight, early 1990s flood of Death Valley grunge, Alice's first studio effort since the Staley era sticks close to the Boggy Depot of Cantrell's frontiersman strum, "Your Decision" another instant AIC classic seemingly left off '94's Jar of Flies. Similarly pollinated comes "When the Sun Rose Again." A tighter edit would neutralize the LP's "Acid Bubble" on the slippery slope of the second side, but that's a material issue when the bigger one is the closing title track, the album's stripped and most affecting haunt. 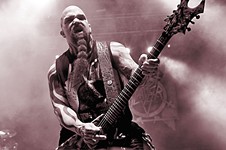 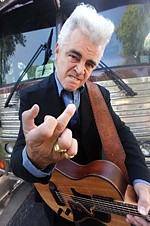 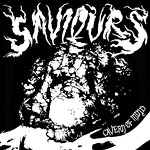