David Garza never suffered a sophomore slump with Twang Twang Shock-a-Boom, the quirky acoustic trio he formed his freshman year with drummer Chris Searles and bassist Jeff Haley at the University of Texas. Over the course of two semesters (1989-1990), Twang Twang went from busking on the West Mall to being one of the hottest tickets in town, recording more than 50 songs in the process. The band's most well-known tape, Me So Twangy, which was recorded and mixed in one day, sold 5,000 copies, mostly at Waterloo Records, and has been digitally and physically reissued. An anthology collection is scheduled to drop next year. "It just seemed like a natural thing to do for three people that maybe felt a bit restrained from the music school," reminisces Haley, who relocated to New York, about playing on campus. The trio broke up in 1990 but reunited in 1996 for a West Coast tour that ultimately led to Garza's deal with Atlantic Records (see "Musical Manifesto," April 3, 1998). A couple of holiday shows followed a decade later, and following a free happy hour performance at the Austin Farmers' Market at the Triangle on Wednesday, Twang Twang takes a formal bow at the Cactus Cafe this weekend, Dec. 11-12. "When we play together, it's like no time has passed," Haley concludes. "We're like brothers."

"It was just such a trip," smiles Spencer Perskin of Shiva's Headband, reflecting on the legacy of the Armadillo World Headquarters (see "Shiva's Headband Experience," Aug. 12, 2005). "Everybody wanted to be a part of it, and it took a community to make it work." It was Shiva's first single, 1969's "Take Me to the Mountains," released on Perskin's Armadillo Records, that caught Capitol's attention, and the resulting major label advance helped fund the opening of the legendary local venue the following year. The rest is a glorious haze. Armadillo Records went on to release Angela Strehli's first 7-inch, a studio LP by Kenneth Threadgill, and a Bugs Henderson live album, 1978's At Last. After a three-decade hiatus, the imprint is relaunching with a new release from 'Dillo staple and longtime label head Hank Alrich and his daughter, Shaidri, with Doug Harman, Carry Me Home, which features on its cover the last piece of art completed by the late Bill Narum. "The music is wonderful and celebrates a rebirth," relates executive producer and former Balcones Fault leader Fletcher Clark, who's also looking into some reissue possibilities and archived recordings. "But it also celebrates the passing of one of Austin's greatest visual artists and a huge part of our family." The Alrich family commemorates the release Friday, Dec. 18 (3:30-6pm), at the Armadillo Christmas Bazaar, whose impressive live music programming kicks off this Friday at noon with BettySoo.

Edge of a Dream

Capping off a banner year, Wimberley teen Sarah Jarosz, who opens for the Dave Rawlings Machine with Gillian Welch at the Parish, Dec. 13-14 (see Recommended), earned her first Grammy nomination for Best Country Instrumental Performance for "Mansinneedof" from her stellar Sugar Hill debut, Song Up in Her Head. A freshman at the New England Conservatory, Jarosz co-produced the album, whose "Long Journey" aired on ABC's Brothers and Sisters on Sunday, and will face off in the category against former locals the Greencards' "The Crystal Merchant." All together, 39 Texas-born or -based acts lassoed a total of 58 nominations, nearly double that of last year, led by Beyoncé's clean-sweeping 10 nominations. Other nominees for the 52nd annual ceremony, Jan. 31, 2010, at the Los Angeles Staples Center, include Willie & the Wheel (Best Americana Album), Ruthie Foster (Best Contemporary Blues Album), and Shawn Colvin, whose Live album is up for Best Contemporary Folk Album alongside Steve Earle's poignant tribute Townes. In the confounding category of Best Classical Crossover Album, renowned chamber ensemble Conspirare earned its fifth nod for the A Company of Voices concert, recorded at the Long Center last October, while Austin author Douglas Brinkley is up for Best Album Notes for Gonzo: The Life and Work of Dr. Hunter S. Thompson. 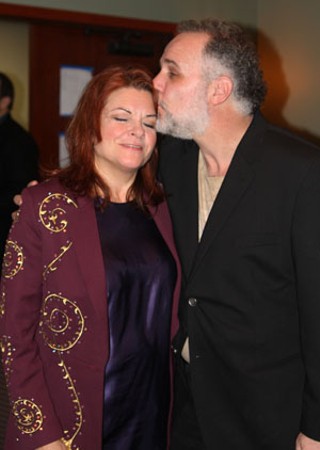 That Rosanne Cash appeared at KGSR's 19-year anniversary party at the Texas Union Ballroom on Saturday was a testament to the legacy of Jody Denberg. His last on-air broadcast for the station proved a bittersweet affair, contrasting the more festive romps of the Gourds and Bob Schneider against Cash's stark ballads, culled by her father Johnny Cash for The List, most notably "Long Black Veil" and "Sea of Heartbreak," accompanied only by guitarist/husband John Leventhal. The consummate deejay, Denberg's request earlier that morning at Waterloo Records highlighted the evening, a chilling "What We Really Want" from 1990's Interiors. As Cash acknowledged, "He's one of the last old-school music people."

Just more than a year ago, Ian McLagan got the wheels rolling on a Faces reunion (see "Saving Face," Aug. 6, 2004). After a one-off concert with guest vocalists at London's Royal Albert Hall in October, the local keyboardist, who flies solo at the Cactus Cafe on Tuesday, is taking things to the next level. "We're doing it next year," he confirms gleefully. "I've been waiting since 1975. That's a long fucking wait. I'm 64. Who knows how we'll be in two years." While no dates are confirmed, Mac listed Paul Rodgers and the Black Crowes' Chris Robinson as potential replacements for Rod Stewart, along with Sex Pistols bassist Glen Matlock, and all but guaranteed a local appearance. That is, of course, if Ronnie Wood can keep his Black and Blue to himself.

After struggling to remember lyrics at the Hole in the Wall last Thursday, Will Sexton underwent neurological testing at the University Medical Center Brackenridge that revealed he had a minor stroke. The 39-year-old local songwriter was scheduled to be released on Wednesday. "He's in really good shape, and all of his motor skills are normal," relays his brother, Charlie Sexton. "Now we're trying to get down to the bottom of what caused it."

Contrary to last week's club report, Encore (611 E. Sixth) plans on hosting live music two nights a week while also serving as an event center, complete with a private VIP area. According to booker Tammy Moore, formerly of the Back Room, the first show on the books for the 700-capacity venue is a New Year's Eve bash with San Diego indie rock outfit Transfer.

Former Undertones singer and current CEO of UK Music, Feargal Sharkey has been confirmed as a featured speaker for South by Southwest 2010. Elsewhere, Houston stalwart Rodney Crowell has been tapped as the keynote speaker for the 2010 Songwriters Symposium (see "Middle Americana," Jan. 16) coming Jan. 29-31, 2010, to the Wyndham Garden Hotel: www.austinsongwritersgroup.com.

Expect to be humming Suzanna Choffel's "Archer." Slated for her forthcoming album, due in early 2010, the song was recently licensed by Dell as part of the campaign for the new Windows 7 operating system. The local ringer (see "The Next Fun Fearless Female Rock Star," Nov. 28, 2008) also took home second place in the AAA category of the International Songwriting Competition with "Hey Mister" from her enticing debut, Shudders & Rings.

Local saxophonist Tony Campise is still recovering at St. David's Rehabilitation Hospital from the head injury he endured after falling at his Corpus Christi hotel in October. Plans for a long-term care facility are in the works, and donations to that end can be made payable to Tony Campise c/o BBA Management, 12400 Hwy. 71 W. Ste. 350-177, Austin, TX 78738.