Valhalla, I am coming: (above) Honorary Norsemen Marcos Aviles (l) and John Wickham in the nicest bathroom in all of local clubdom; (at left) Eyedea & Abilities having a Highball, Nov. 19 (Photo by John Anderson)

The local venue landscape is shifting faster than the weather. Since last checking in ("Off the Record," Oct. 23), club Mixx has shuttered. Some remaining dates, most notably Hug's peep show on Friday, Dec. 4, with Coma in Algiers and Elvis, have rebounded over to Headhunters. Meanwhile, Transmission Entertainment has let go of the lease on Sixth Street's Radio Room. "The capacity wasn't much bigger that what we have at Mohawk," concedes partner James Moody. Here's an updated scouting report on musical real estate.

In Norse mythology, Valhalla is essentially the drinking hall for Vikings who died in combat, a fitting name and metaphor for the new rock & roll lounge that replaced Room 710. Like Red 7's indoor area, the remodeled club boasts a jukebox, pool tables, air hockey upstairs, and at least one claim to fame: "The nicest bathrooms on Red River," concludes owner John Wickham of Elysium, who plans on adding a second-story smoking deck. 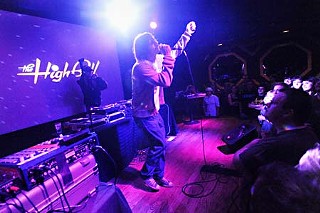 Not only is the Highball the best place in town to sip a White Russian, the Drafthouse's retro bowling alley also has a 300-capacity subsection, and its low-lit ambience and 1970s Vegas ballroom style make it ideal for smaller shows, such as last month's hip-hop doubleheader of Themselves and Eyedea & Abilities, booked by Transmission Entertainment. Expect lots of themed karaoke and dance parties, including the Action Pack's monthly 1980s night, Bust a Move, this Saturday, Dec. 5.

The club formerly known as Spiros has been split into two distinct entities, the larger of which – Encore – is scheduled to open this weekend with what appears to be a dance-oriented format. The neighboring Barbarella is an extension of Orlando, Fla.'s longstanding Independent Bar, with themed DJ nights (Wednesday-Saturday), and is helmed primarily by manager Harvey Graham, who notes, "It has more of a Sixth Street vibe than Red River."

Easy to find but impossible to keep tabs on, this cantina should be a holiday staple for traditional tamales. Recently, it started providing a much needed outlet for Tejano music on Sixth Street, as illustrated last month by veteran family band the A-T Boyz.

Who says MySpace is dead? On the strength of its online presence alone, local shoegazers Ringo Deathstarr landed a deal with Japan's Vinyl Junkie Recordings, which issued the quartet's debut full-length, Sparkler, collecting the reverb reveries from the band's killer 2007 EP, a UK 7-inch, and a few unreleased songs. "They have a display of us set up at Virgin Records in Tokyo," relays singer/guitarist Elliott Frazier, fresh off a label-sponsored tour of the Land of the Rising Sun. This week, the band also released a split 7-inch with Depreciation Guild on Club AC30, coinciding with the band's European jaunt and an appearance at the label's Reverence Festival, for which it left 48 hours after returning from Japan. With any luck, a new LP, recorded over weekend spurts at the Bubble, will be finished by the end of the year and hopefully ensure that the group gains similar traction stateside. "We're trying to do more pop and more noise at the same time," Frazier concludes. "We want to write catchy songs but without losing our noise-y, punk edge. I want to force people to hear some guitar feedback."

Lyricist Robert Hunter has penned a new chapter in the Grateful Dead's long, strange trip for 7 Walkers, the budding project between Austin's Papa Mali and Dead drummer Bill Kreutzmann, which premiered at the Austin City Limits Music Festivalin October. "Hunter always set the Dead apart, that great catalog of songs he wrote with Jerry Garcia," relates Malcolm Welbourne, better known as Papa Mali. "Every time he sends me lyrics, I sit and stare at them until they begin to speak to me. They're so rich in character and lively with Louisiana references. It's a challenge to come up with music that's not only appropriate but worthy of his literary process." 7 Walkers, rounded out by Austin keyboardist Matt Hubbard and Reed Mathis of Tea Leaf Green, is currently recording its self-titled debut, tentatively set for a February release and meeting halfway between Papa Mali's swamp-blues and Kreutzmann's jazz-influenced psychedelia. "People are excited to see something from the Dead that's not a cover band," enthuses Welbourne, who first met Kreutzmann last year at the annual Oregon Country Fair. "I've never been one of those guys that has posters of Jerry on my wall or tries to play like him, and that's one of the reasons this works."

• "A wall of noise can go a long way towards smoothing over your differences," acknowledges bassist Jeff Copas, confirming last week's announcement of a Sixteen Deluxe reunion – with guitarists Carrie Clark and Chris "Frenchie" Smith and longtime drummer Steven Hall – at South by Southwest 2010 after a decadelong hiatus. "I've already lost hearing just typing this." The reunion also marks the 15-year anniversary of the local supernova's Trance Syndicate debut, Backfeed Magnetbabe, and there's a good cause involved, too: a benefit for the SIMS Foundation at Mohawk on March 12, 2010. While there are no plans for a new album or a tour, the band appears cautiously optimistic about the future. "Personally, I'm always looking to produce and be near great talent," furthers Smith, currently living at the Leeders Farm studio in the UK and helming the debut album by Swiss garage rockers the Dandies. "To me Carrie really radiates; I always did my best work as a writer with her. She's always been one of my idols. It was time to revisit our potential."

• Lions is making its new six-song EP, Let No One Fall, on the UK's Maybe Records, available for free download until Friday, Dec. 4, coinciding with the local rock staple's tour with Monster Magnet across the pond. Lions ringleader Matt Drenik's surprisinglyBand of Horses-esque side project Battleme can be heard in this week's Sons of Anarchy season finale on FX and will be on the show's soundtrack. www.lionstheband.net. 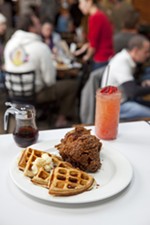 The 2011 Fried Chicken Update
Flip the bird – onto a waffle, that is