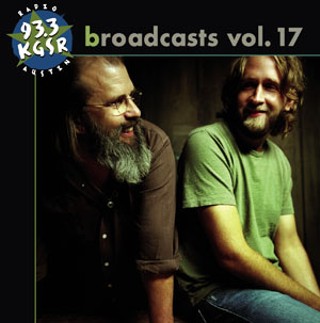 
Jody Denberg's labor of love over 17 years and 34 CDs, KGSR's Broadcasts series sells itself on the bullet points alone: $2 million raised for SIMS since Vol. 5; all artists donate their tracks for one-time use; save for dregs of Vols. 14 and 15, all runs have sold out; Vol. 1 once sold for $150-200 on eBay until someone bootlegged it. Broadcasts Vol. 17 ends an era now that Brother Jody exits the frequency he built, and if it doesn't always go out with the bang of Alejandro Escovedo's "Velvet Guitar" and Ben Harper wringing snorty guitar soul out of "Lay There and Hate Me," it ain't whimpering Ryan Adams & the Cardinals ("Fix It") and Pete Yorn ("Don't Wanna Cry") either. Another 2-CD smorgasbord pigging out on 40 live and unique recordings, BV17 does what all of Denberg's heartfelt productions have managed: a mash-up of Austin's passions past, present, and future through a web of musical interconnectivity. Abigail Washburn's banjo pluck over Ben Sollee's sorrowful cello saw on "What Are They Doing in Heaven Today?" segues divinely into Gillian Welch's breezy "Everything Is Free," but both ladies better be looking over their shoulders for Sarah Jarosz ("Song Up in Her Head"). Maceo Parker's short, sweet "Blues for Clifford" Antone, electric piano the rye crisp under the sax man's soft wedge, sets up Peter Case's acoustic dust-up on "Crooked Mile," sounding like the path to Woodstock 1969. The usual suspects (Tift Merritt, Raul Malo) line up with the talking blues of Todd Snider's "The Ballad of the Kingsmen," which pairs with Hayes Carll's feed-store vulnerability of "Beaumont." The Southern strain, Derek Trucks' sky-crying slide ("Already Free") and the fleet-fingered Allman-esque picking of the North Mississippi Allstars' "M.L. Going Home," peaks on Ryan Bingham & the Dead Horses' National Steel slide "Bread and Water." Misses – Gomez's soggy "Airstream Driver" and Arc Angels toothless "Sent by Angels" – are few among middle-of-the-road local fare (Asleep at the Wheel, Ruthie Foster), especially when our own take the high road: the Gourds' literature of the absurd ("Tex-Mex Mile") and Spoon's acoustic verité ("Black Like Me"). That's when the mountain air of the Avett Brothers ("Murder in the City") leads to the whistled aviary of Andrew Bird ("Fitz & the Dizzyspells"). Adele ("Right as Rain") could be any chasm-voiced Brit bird, and discoveries like French/Nigerian Asa ("Jailer") stoke serious interest, but BettySoo's power projection ("Never Knew No Love") reps A-Town with bravado. And then there's the "gets": Tori Amos' paralyzing piano drama ("Silent All These Years") and Steve Earle scrubbing layers of dead skin off Townes Van Zandt's "Ft. Worth Blues" as the closer. Wait for the hidden, 41st track; Broadcasts Vol. 17 is dedicated to beloved Stephen Bruton.