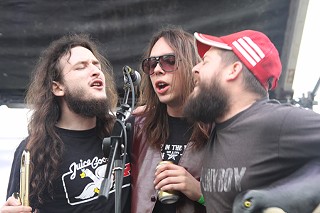 Fun Fun Fun Fest may brand itself as an "anti-fest," but the two-day jaunt at Waterloo Park still endured the same fate as every other major music gathering this year, as the so-called "Danzig black clouds of rain" toppled even the mighty Mohawk of the Krum Bums' Dave Tejas on Sunday. While the muddy ground conditions made last year's dust bowl pale in comparison, aside from some minor delays and rescheduling King Khan & BBQ Show's set to a free afterparty at Red 7, FFFF had one perfect day and still upped its ante in every possible regard.

On the local tip, Joe Staats from the Altercation Punk Comedy Tour had the crowd eating out of his hands at the Yellow Stage, but the Laughing's early morning jungle fever on Saturday proved no joke, unlike the by-design sole power and manicured choreography of a costumed Foot Patrol. Alan Palomo's Neon Indian attracted more attention, but the vintage disc-glow grooves of his side project Vega, which just inked a deal with Fool's Gold, proved the better bet, recalling MGMT's breakthrough three years back. Filling in for Flipper, the Sword brought the fury of biblical proportions, sharpening its blade and thickening its deep Texas swagger with its new "Lawless Land."

Sunday morning, Bankrupt & the Borrowers paid an emotionally unnerving final tribute to the band's founder, Jon Pettis, who died last month in a tragic house fire. From tragedy to triumph, Riverboat Gamblers' guitarist Ian MacDougall, who was severely injured in a bike accident a few weeks back, got in on the action against doctor's orders for the communal exultation of the hometown heroes' set closer "The Art of Getting Fucked." Meanwhile, filmer Christopher Rose put down his camera long enough to turn out a serious dance party on the Blue Stage with custom remixes aided by hypeman and local MC Neiliyo, but the ultimate mash-up came courtesy of Metallagher, who splattered watermelons to the tune of Metallica's "Blackened." The start of a beautiful friendship, Mika Miko's Jenna Thornhill added acerbic sax to the Strange Boys' "Poem Party," the perfect chaser to Harlem's punch-drunk 1960s pop.

The most notable improvement this year was the official afterparties, which were more of an extension of the fest than an encore, with no repeat performances. The UK's Lovvers bashed out brash garage-pop at Beerland on Saturday, while Austin's Octopus Project worked electronic wizardry at Mohawk and local instrumentalists the Jazzus Lizard took their final bow later inside. Then again, nothing could really follow the celebratory psychosis of the Jesus Lizard, whose headlining reunion matched the Stooges' hullabaloo at Stubb's for South by Southwest 2007.

Other highlights included Les Savy Fav's "ladder surfing," the boutique flair of Chi-Town's Cool Kids, Royal Bangs' compact electro-jams, and the shrill, lo-fi skuzz of Times New Viking and No Age, not to mention Astronautalis' trademark word-bank freestyle. There was plenty of nostalgic punk glory, courtesy of Face to Face, hardcore champs Gorilla Biscuits, and Detroit's Death, while Of Montreal, with a wardrobe culled from the set of Donkey Skin, delivered softcore glam-rock that, along with Ratatat and Kid Sister, bolstered Transmission Entertainment's crossover appeal. Much like the downpour at the Austin City Limits Music Festival last month, Sunday's rain only accentuated the atmosphere for the terror-alert laptop drone of Fuck Buttons, Broadcast's abstract lullabies, and the slow-motion balladry of Atlas Sound. "I like to make people moist but in a different way," offered ever-awkward frontman Bradford Cox.

Make no mistake, though, the Sabbath belonged to Danzig. "On his rider it says not to look him in the eyes," joked Brian Posehn with slacker sincerity. "He also doesn't like it when you pat him on the head or pick him up by the scruff of his neck." Tell that to the St. Elias Eastern Orthodox Church, whose Sunday early morning mass was interrupted by the evil one's sound check – a matter resolved in time for the 10:30am service. Bringing the ceremony full circle, a fan took the stage after the band's festival closing apocalypse and, fulfilling a final wish, spread the ashes of her deceased friend where Glenn Danzig last stood. "To tell you the truth," admits Transmission's James Moody, "we were all a bit freaked out by it."

Without a doubt, AC/DC caters to the (quite expensive) cheap seats. Returning to the sold-out Frank Erwin Center on Friday for its first local stopover since 1996's Ballbreaker tour, the Aussie locomotive brought two hours' worth of backseat rhythm and maximum rock & roll all the way to OTR's last row seats of the upper deck. From the iron toll of "Hells Bells" and Brian Johnson's gigolo strut for "Dirty Deeds Done Dirt Cheap" through the cannonade of encore finale "For Those About to Rock (We Salute You)," guitarists Malcolm and Angus Young carried their troops with firecracker intensity, leaving no essential touchstone unturned.

Four nights later, Jay-Z rose to the same occasion, taking center stage from the same elevator shaft as Angus Young. Over 100 minutes, the Brooklyn mogul (he's a business, man) rattled through all 99 of his problems, heavy on latest The Blueprint 3 (opener "Run This Town," "Empire State of Mind") and touching on just about everything else, including his verse on "Diamonds From Sierra Leone," the Collision Course version of "Dirt off Your Shoulder," and an encore medley that coupled flashbacks "Can I Get A ..." and "Hard Knock Life." With a 10-piece band, the American Gangster proved sincere and engaging with rousing Pimp C tribute "Big Pimpin'" and a farewell ballad that even AC/DC would appreciate: "Young Forever."

OTR hit a personal low on Sunday, briefly leaving the grounds to change clothes and returning wearing a stolen trash bag. To prevent such a mishap from occurring again, some local industry insiders were rounded up to compile this helpful festival survival kit.

Jared Cannon, Red 7 manager: "Extra pairs of socks and Dr. Scholl's insoles. Green tea extract or any other snack with natural energy. I used to use stuff like Red Bull to get through fests, but the crash is too rough. And baby powder."

Phil Waldorf, Dead Oceans: "Danzig endorsed rain boots. How is that not a good idea?"

Josh Robins, Austin Music Foundation: "Truthfully, the main thing that kept me going was not drinking any alcohol."

David Brown, KUT's Texas Music Matters: "A 12-pack of plastic garbage bags for throwing equipment into at the last minute and a friend with a pickup truck to help haul a waterlogged sofa back to the station."