"This is gonna be really fucking good," warned David Yow just before the Jesus Lizard went Jurassic Park. Scalpel manufacturer Duane Denison had been sharpening his weapons of mass destruction during the latter half of Face to Face blowing their faces out on the other side of the townhouse stage, so the moment bassist David Sims and drummer Mac McNeilly snapped open the jaws of their long dormant reptilian backbreaker with "Puss," Yow leapt atop the stage-front crush as if Oahu's tide had just rolled in. Denison's guitar shards pierced "Gladiator" next, Sims lurching back and forth in dog trainer attack-and-retreat mode, hellhounds raised by the Austin-hatched quartet's sociopathic sonics in a Fun Fun Fun scrum. Yow festered vocally, "Seasick" hurling bile matched by "Glamorous," "Mouth Breather," and Down syndrome science manual "Destroy Before Reading." The prowling frontman then dedicated an amputating "Nub" to "all the little Mexican boys in the audience missing an arm," Dr. D's razor slide quick and painless – malpractice by any name other than sheer, teeth-grinding ecstasy. Yow's bed-wetting "My Own Urine" and backup "If You Had Lips," both from the Jesus Lizard's debut LP, 1990's Head, joined with set closer "7 vs. 8" and its set-list predecessor "Chrome," from the reissue of Head antecedent EP Pure, in cataloging the murderous, right-angle minimalism of the quartet's femoral pulse. Save for 1998 swan song Blue, every album hacked off a limb for old-time Red River's sake. "Then Comes Dudley" swaggered and staggered, "Boilermaker" bullied, and "Blue Shot" fired cannonballs. "Monkey Trick," plus "Thumper" in the four-song encore, goosed a last-minute frenzy from the hourlong, 19-song rebirth before TJL's trademark cover of the Dicks' "Wheelchair Epidemic" had the last mosh if not quite the last word(s). Pronounced Yow as coda: "Randy Biscuit Turner." 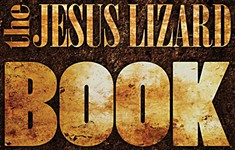 The Jesus Lizard Book
Zeppelinesque hammer of the gods