Inside a dark room at the Salvage Vanguard Theater, a man stands behind a table alight with burning candles. He's wearing glasses and a black T-shirt, reciting from a book.

Behind him, the Waco Girls – at 1am this Saturday, just drummer Nick Hennies of the Weird Weeds and Brent Fariss on bass – play a doomy, repetitive riff for what feels like hoooouuuuurs.

Well, no one else in town was going to stage a marathon reading of 50,000 names from Dan Nelson's All Known Metal Bands. Except this night, titled Vexations, is exactly the kind of thing Church of the Friendly Ghost relishes.

While ancient seals are possibly broken through the repetition of certain demonic invocations, tonight's conjunction with Gnap! Theater Projects' three-weekend-long Just Like the Rodeo Fest melds two groups' creative minds for a curative collection of experimental music and outsider theatre. Folks wander in and out, amused or confused.

"We're basically offering the most interesting/boring thing to do on a Friday," laughs Aaron Mace, Church founder and presenter.

He's either lamenting the night's turnout or anticipating what's to come later that morning (the cops were called), but it's a fitting description of what Church of the Friendly Ghost has become in Austin: ground on which unclassifiable ideas volley and where experimental, outsider, and improvisational music freely hyphenate. As one of the only consistent venues for this, performances have gone from a few gigs a month to weekly events.

It's a bit different from 2003, when its home was an actual church off Pedernales and Cesar Chavez. The idea was to fix the place up so Mace and three friends could live there while hosting musical performances in the chapel.

"My idea was straight from Epistrophy Arts," explains Mace, 32, referring to the local music arts promotions entity (Pedro Moreno). "I saw those first performances at 33 Degrees in 1998 and thought it was a really important thing. I thought we could do that at [the Church]."

Those were the so-called salad days. Bad Livers fiddler Ralph White played one of his earliest solo shows there and received a standing ovation. Soon after came a performance of John Coltrane's Om, organized by local sax corrosive Carl Smith. It was the site of the first No Idea festival. The Weird Weeds put on their earliest gigs at the Church, where the Invincible Czars also performed their first Nutcracker Suite. Japanese blues rockers DMBQ set the Church's pews on end, then karate-chopped them. Sound artiste Alex Keller remembers one night in particular. 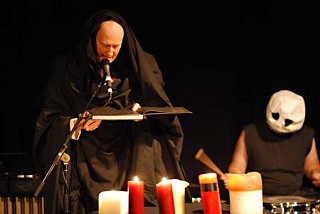 "[In 2004] Josh Ronsen, Elana Logsdon, and I put on Flux Cafe, a Fluxus performance evening which had no admission. Instead, the audience ordered – and paid for! – performances from a menu. I fried and boiled microphones, someone played baseball with fruit, the audience was bound, and I shaved Josh's head."

For all the Church's firsts, noise complaints from neighbors became more regular, and one especially rowdy South by Southwest '05 day party, in which bleary-eyed hordes spilled out of the Church and into the street, didn't help.

"The cops showed up," remembers Mace, "and sort of shrugged their shoulders, as if to say: 'What can we do? No one's doing anything bad.'"

A month later, the city came a-knockin' and a cease and desist was issued.

"I wanted to continue it somehow," he adds. "It had gained a lot of momentum just as it was shut down. A community had coalesced around it."

When the Church took up residence at the Salvage Vanguard Theater in July 2007, it was a serendipitous if shaky transition. The theatre allowed for more space, as well as a whole new think tank.

Mace, a former KOOP DJ who grew up in Wyoming, has his sights on the outré to be sure, but his heart is in the homegrown. He's rarely cynical, which helps when presenting and promoting performances that are often sparsely attended, not highly publicized, or appeal to a smaller audience. He uses the term "musical appreciation" to describe his education over the years, the process of sifting, listening, and relistening to countless finds like music obsessives do.

It also extends into Church performances, like last year when he and others played then destroyed a bunch of orphaned cassettes and mixtapes collected as part of the "Twilight of the Little Boxes" installation.

"There were some tapes I just couldn't destroy," he laments. "And with mixtapes – they're very expressive, and you wonder why someone made it. So I thought, here's something cast aside for some reason, this musical artifact. Let's play it and then end it! In the process of smashing them, we pulled out so much tape it looked like black melted cheese was hanging from the rafters."

What are you looking for when you're booking acts?

"The undercurrents in creative music, the ones not getting picked up by venue culture or the more academic culture. When music is such an economic driver, as it is in this city, it becomes subject to the games of economics. So it's hard for people on the fringes to have a point of access to those landscapes. We're that middle ground."

Are there other venues doing something similar? 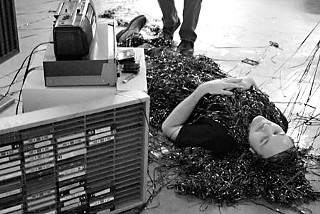 "It seems like any city this size, and bigger, has a culture of house shows. Nothing beats a good house show. There are slightly more organized institutions, like Machine Project in L.A., which is more education-oriented. That's what I'd like to strive toward."

As recently as five years ago, house shows here were more prevalent.

"Well, it goes along with development and the culture that draws. Austin is a heavily policed town, and it is Texas after all. Fines for noise violations are ... prohibitive. I've personally gone broke trying to pay them."

Texas is such a huge state. Even in El Paso, Lubbock, Denton, there are little pockets of creative or noise culture.

"There's a certain spiritual yearning for creativity that's the same in all kinds of music. What you call punk rock is really a yearning to express something new, deal with material that's uncomfortable. It's the same with improvisation and noise, making things for people to observe and take in. Just because something's been done once doesn't mean it's been done enough. Jazz is regarded as a classical form, which has always sort of offended me. Within that genre, there can be reinterpretations of interpretations."

There's a dadaist spirit to what Mace is doing, the concept of the cafe, the shared vision space.

"It didn't take the Church long to become somewhat of a home away from home for me," relates guitarist Doug Ferguson. "I was there several times a week. It was great knowing that I could call up Aaron and get just about any date for any type of weird off-the-wall idea I had for a show."

"His dedication to creative music is very devout," offers Smith. "He always treats musicians with respect and takes on shows often to his own peril. Without him, I and many of Austin's creative music artists would have absolutely no place to play and no opportunities to present their music to the public – an important part of the creative process."

"I envision it as kind of museum of musical culture for Austin, though we don't collect," says Mace. "We exhibit and work to be engaged with the now. That is to say we aspire to more than an 'alternative space.'

"We're dedicated to working on the fringes of creative expression in music, at the farthest reaches possible from the academic or corporate models on which music culture in Austin is largely based."

With like-minded volunteers now helping with various tasks, the service aspect Mace talks about begins to take shape, and the social aspect of church comes into focus. He only wants to increase the number of his parishioners. 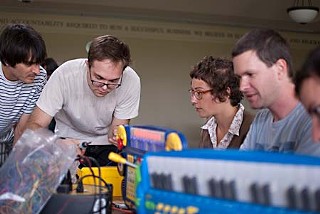 "The Salvage Vanguard is a forum where musicians may exchange all the kinds of information you might imagine musicians exchanging, including information about other things in Texas: Super Happy Fun Land in Houston; Metrognome in Fort Worth; Dave Dove in Houston, who works with Nameless Sound and does wonderful things; various houses and galleries around Texas that host the occasional performance.

"Austin is behind, in my opinion, and a lot of what we're doing economically with music in this city is old-time thinking. Though almost everyone involved here is transitioning – be it forced or be it a tactical move – as a city we're still behind.

"We're really just beginning to conceive creative ways to toss dust on the boundaries between medias and disciplines."

Blasts From the Past "Jennifer Gentle stayed with us for almost a week. That was a weeklong psychedelic jam in the chapel. So good, and great Italian home cooking in the late afternoons."

Live score for Faust by the Willem Breuker Kollektief An early morning reading of All Known Metal Bands, October 2009 Only the Fourth Wall Is Forever
After 10 years, Salvage Vanguard Theater is moving on 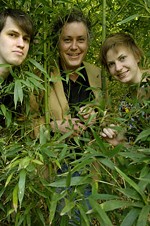