Trey Ramirez, 27, screamer-songwriter for Pack of Wolves, is a guitarist by trade, a Laredoan by birth, and leads Austin's arguably best metal quartet after the Sword by design. 2009 LP Betrayer (Arclight) follows an EP and precedes demos for a coming full-length that will make the band's name. We spoke by e-list.

Trey Ramirez: As far as desert island metal albums, I have to say: Iron Maiden, Powerslave; Metallica, ... And Justice for All; At the Gates, Slaughter of the Soul; and I'd sneak Nightrage, Sweet Vengeance – such a good album!

AC: Three metal vocalists you'll never get out of your head?

TR: Bruce D, Maiden; Ozzy (that twang gets stuck in your head); and King Diamond, any era. Those highs are something to be appreciated.

AC: How would you describe your own singing style?

TR: I get a lot of comparisons to Carcass. I remember when I was young and I heard a local metal band in D.C. "singing" this way. First I thought of Satan on the mic. Next I thought, "How do I do that?" It's been a progression for sure. I try to blend black metal vocals with a bit of mid-range.

TR: Three bands with guitar players whose songwriting I really like are Iron Maiden, Emperor, and Necrophagist. Of course, we must all recognize the influence of Eddie Van [Halen] and Dimebag Darrell.

AC: I'm sensing a fondness for Maiden. They're quintessential Laredo, no?

TR: They actually went through Laredo a couple of times in the 1980s. However, Quiet Riot was my first concert.

AC: Is there anything Quiet Riot did better than Iron Maiden?

TR: Yes. They made it to VH1's Behind the Music first! And they made it cool to "bang your head." 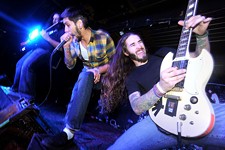