Toronto's Fucked Up does to hardcore what Extreme Championship Wrestling did for sports entertainment: elevate the tradition to an art. The group's Polaris Prize-winning third album, 2008's The Chemistry of Common Life (Matador), opened with a flute solo and never looked back, fusing prog atmospherics and brooding psychedelia into its hardcore template. Most importantly, Fucked Up isn't afraid to bleed.

"Absolutely," agrees frontman Damian Abraham, who goes by the alias Pink Eyes and has a stage presence that's equal parts Abdullah the Butcher and the Sandman. "Wrestling is a huge influence on the way that I look at this thing. I want it to be as real and as honest as possible, but there's also a show quality to it. People should leave shocked and awed."

Gearing up for another cage match with Greg Gutfeld on Fox News' Red Eye ("If they think Obama is a socialist, they're going to think I'm a terrorist"), Pink Eyes reminisced about the kings of the ring.

"Mike Awesome. He was a big guy that could actually move. He was committed to pulling moves and busting high spots and things like that, but at the same time he was doing some extreme stuff. Even the worst wrestler in ECW was better than most of the stuff that's on TV now."

"As a portrayal of this business from my outsider understanding of it, it was a perfect presentation. It was definitely Beyond the Mat. At the same time, when I see a punk reference in mainstream media, no matter how bad it is, like the Freaks and Geeks punk episode or whatever, the hair on the back of my neck goes up 'cause it's so unexpected."

"Sandman versus Raven is one of my favorite feuds of all time. Anything with Sabu and Rob Van Dam. That was a time when all of these wrestlers were given the forum to do what they wanted. There was an intelligence to it that people tend to want to ignore." 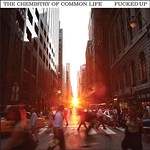 Fucked Up
The Chemistry of Common Life (Record Review)