Following up 2007's lovely Hello, Avalanche, the Octopus Project's new five-song EP, Golden Beds, on formerly local label Peek-A-Boo, tastes the rainbow, running the spectrum from thrashy guitar ("Wet Gold") to more familiar ambient territory ("Half a Nice Day"), but it points to OP's desire to break its electro mold. It also marks the appearance of more vocals in the mix, a nice counterpart to the harder edge here, and since it's such a visually stimulating band, Golden Beds comes with seven videos. Quite an efficient EP. Continuing on the efficiency tip, ATX quintet Pataphysics' 3-inch Pam EP drops four on the floor, the sweet trot of "She Took a Whole Lot of Acid" and harmonies of "Don't Die" more pensive and focused than the off-the-rails pop-punk of 2008 LP Take a Look Out Your Window. The Black & White Years follow up last year's self-titled debut buzz with the five-song Nursery Myths, a taste of what their sophomore album might sound like. It's not far from the dancey synth-pop of their Jerry Harrison-helmed LP, Scott Butler's vocals a tad overindulgent here and there, safe music for hard times. One band not interested in safe music is studded leather cabal Krum Bums, whose Same Old Story (TKO) continues digging into the hardcore punk wound opened on 2007's As the Tide Turns. "Dead New World" and "Sons of Nothing" don't churn as much as snarl like England, '76. FTW. 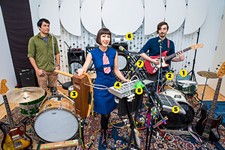 My Gear: The Octopus Project
Electro experimentalists swear they subscribe to less-is-more despite their density of gear 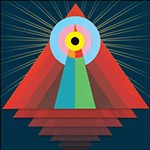 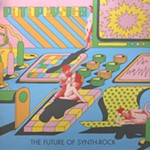