It's no coincidence that Matt the Electrician performs before Bob Schneider at the Saxon Pub and teams with Southpaw Jones at Flipnotics. That's the opportunity to play to those who appreciate his endearing parade of characters inhabiting worlds of Animal Boy from Wal-Mart ("For Angela") to Japan ("Osaka in the Rain"). He also deals in a folk-singer truth-telling, where he can toss out wry cautionary wisdom such as, "And I have never wrestled a bear, but I have seen pictures in books" on "Bridge to Nowhere" after opening on a cover of Journey's "Faithfully." Surrounded by well-tempered instrumentation, Matt plays more than a dozen instruments including banjolele, toy piano, and frying pans, yet his stock-in-trade is the lyrical twist he delivers with unself-conscious panache. If your life's on the blink, Matt the Electrician can repair it. 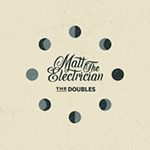