It takes a compass to track David Garza. Over his two-decade-long career (see "This Euphoria," Jan. 23), Austin's great pop chameleon has landed all over the map, a fact reiterated by The Road to ACL, a new four-EP collection – now streaming exclusively (at right) on the Chronicle's site – that balances Pan-American soul and piano pop with Spanish boleros and four-track manifestos. "I got this idea from a very early age that there was something for everybody," says Garza of the EPs, which were recorded during and after his sessions of Dream Delay. "It may not be the hit, but it's there." To further commemorate the occasion, Garza provided his personal six degrees of separation to some of this weekend's Austin City Limits Music Festival performers.

John Legend: "Doyle Bramhall II and I played on the sessions for his last record. We're on his B-sides, of course. There's a great song called 'Sun Comes Up.' It's this gospel, back-porch acoustic thing, that Bells of Joy kind of stuff."

Andrew Bird: "We're both in Largo, the movie. It's a concert film, basically the last stand of this really cool club in L.A."

Daniel Johnston: "I taught him how to play F-sharp minor in 1990 at the Hole in the Wall. I'll never forget it."

John Paul Jones of Them Crooked Vultures and Sara Watkins: "Hearing one of your songs ["Too Much"] with John Paul Jones playing your bassline is a good way to start your day. I've jammed with him a few times, and of course, Sara is a huge part of music and has been for a while."

The Scabs: "I was a Scab for a day, filling in for the guitar player on a day's notice. They told me to just show up and bring a black suit and tie. I had to learn their moves."

Pearl Jam: "Jeff Ament is a friend and a great guy. He asked to play bass with me for a few Seattle shows in 2002. We practiced for a day at Pearl Jam's rehearsal space. I played through Neil Young's backline."

Even without his cape, Ghostland Observatory beat maestro Thomas Turner still resembles a mad scientist, reclining in a chair in his new home studio, surrounded by keyboards and stereo consoles. "I went with a lot of analog gear and old-school technology," says Turner of his "dojo," which was impeccably designed and built by local engineer Chet Hines. "I'm hoping that in working with older gear, our new material will be a bit slower and not as flashy, something big and smooth like an old lowrider." That last part makes frontman Aaron Behrans smile sheepishly. "My influence comes from whatever Thomas throws into the ring," he says. GLO hasn't yet laid tape in the new digs, mainly because the undulatory local duo has been on the road since the release of last year's Robotique Majestique. They're spending this week rehearsing for their Austin City Limits Music Fest headlining set on Saturday. "There's always pressure," admits Behrans, nearly unrecognizable in street clothes, of GLO's supersonic ACL sets, "but once it's live, there's no nervousness. Just close the cage door, and let's get it on."

• "To be on the other side is going to be kind of surreal," enthuses Hacienda pianist Abraham Villanueva, who watched the Black Keys at ACL 2005. Dubbed the Fast Five, the San Antonio family band has been backing the Keys' Dan Auerbach since February. He's producing Hacienda's next LP.

• The debut from folk-pop crooner Matt Morris, When Everything Breaks Open, due later this month, was co-produced by Justin Timberlake and Arc Angel Charlie Sexton.

• Sweet Tea, the side project of the Heartless Bastards' Erika Wennerstrom and Alex Maas of the Black Angels, recently issued its debut 7-inch duets, "If I Were a Carpenter" b/w "Crazy Arms."

• Noted Roky Erickson acolyte Peter Buck of R.E.M. hits a grand slam tonight, Thursday, Oct. 1, at the Continental Club with his minor league outfit the Baseball Project, not to mention the Minus 5 and Steve Wynn IV, then backs Robyn Hitchcock at ACL as part of the Venus 3. 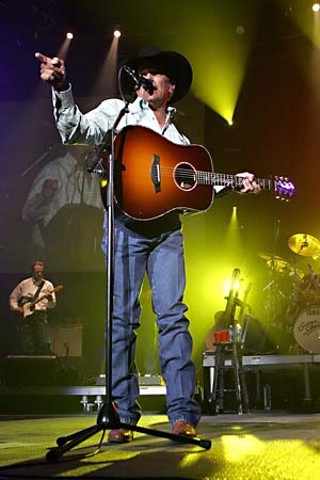 Sharp and refined, George Strait embodies country music. On Friday night, the Central Texas maverick christened the $43 million Cedar Park Center, just outside Northwest Austin. Aside from some opening-night parking congestion, everything went smoothly, and even from the third-level press box, the sound was remarkably crisp as the locally stacked Ace in the Hole band cracked through comfortable classics such as "Ocean Front Property" and "Check Yes or No," before Strait tipped his hat back toward South Congress with Bruce Robison's "Wrapped." As the title cut from his latest Twang reiterated, Strait's still No. 1 with a bullet. Wilco lands at the CPC Thursday, Oct. 8.

• Austin City Limits receives its Rock and Roll Hall of Fame Landmark designation on Thursday and hosts a series of free panels on Friday, beginning at 11am and featuring Alejandro Escovedo and Patty Griffin, that detail the show's history and impact. Pearl Jam caps off the historic weekend on Saturday with a taping that will feature Austin's Will Taylor & Strings Attached for two songs and be simulcast at Hogg Auditorium. See www.austincitylimits.org/blog.

• North Loop's Sound on Sound, owned and operated by the Young's Jason "Jug" Costanzo, is closing Oct. 12. "There's been a decline in business, and I sort of burned out," says Costanzo, who opened the punk outlet in March 2004. A liquidation sale is already in progress.

• Controversy aside, Activision at least got the wardrobe right for Kurt Cobain's avatar in Guitar Hero 5: a Daniel Johnston "Hi, how are you" shirt. The Guadalupe mural is also the basis (and namesake) for a new, locally developed iPhone game that transforms Johnston's art and music into what The New York Times has already (generously) hailed as a "psycho-religious version of Frogger." 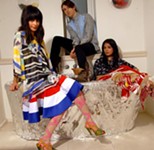 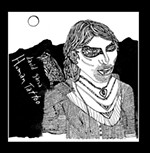