Overcoming the pains of success 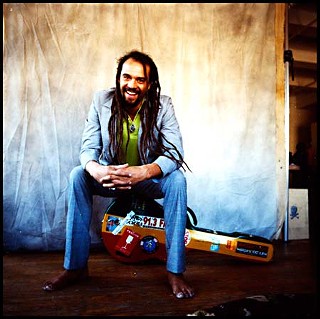 Michael Franti was on tour with the Counting Crows and Augustana in July when his appendix almost burst. The resulting surgery kept him off the road for a couple of weeks. At first he complained that playing his guitar was irritating his stitches. Then he used some good old-fashioned American ingenuity to fix it.

"I put some pillows on the back of the guitar with duct tape," he laughs.

The almost painful irony is that Franti's life should've been getting a lot more comfortable. His latest, All Rebel Rockers (Anti-), features his first hit, the bouncy "Say Hey (I Love You)."

"The day it hit the Top 40," he recalls, "was the day I went in to have my surgery. I'm on the surgical bed and the doctors are saying, 'It's a serious infection; we're going to do our best to get it out.'

"I'm thinking, 'Great, after 23 years of music, I finally have a hit song, I've never heard it on the radio, and I'm about to die.'

"Not that I've ever done it for a hit song. I've done it because I wanted to connect to people and I appreciate [this hit] in a way that maybe I wouldn't if it was my first album, the first song I released."

In today's highly divisive political climate, one wonders if he can reach people that might not be open to his message. "I believe today that the issues that we're facing in our country and in the world are not going to be solved by one person or one political party," Franti retorts. "Take climate change. It's going to take the ideas of the grassroots and the resources of the corporate world cooperating with government. It's going to take all of us, including the consumer power and hard work of everyday people.

"Music isn't going to make all that happen, but I think that it helps people see the possibility that the future can be different when they have nothing else in common."