Half-Hawkwind, half-Warped Tour, Coheed & Cambria added Mother Nature's own Sturm und Drang to its last local performance, when a massive electrical storm hit during the group's set in Waterloo Park. Since then, the martial stomp of "Welcome Home" has become ad execs' favorite guitar track, overdriving promotion for Rock Band and the trailer for the Tim Burton-produced animated apocalypse 9.

The post-prog New York quartet also took to the trend of bands resurrecting a classic album live with the Neverender project: Four-night residencies around the world wherein Coheed & Cambria played its entire back catalog. "It was perfect for us to revisit this massive work, because it will certainly influence what happens next," recalls vocalist, guitarist, and visionary Claudio Sanchez.

That last point is crucial considering that Coheed's body of work to date is really one project: a five-album concept tale of epic science fiction and cryptic autobiography. The band is currently in the middle of recording the yet-unnamed final album, the prequel to the story cycle. Such an archive trawl means that alongside set regulars like 2003 breakthrough "A Favor House Atlantic," vintage tracks such as "The Velourium III: Al the Killer" have started turning up live.

"The task was daunting at first, having to relearn all this material, but it was nice to revisit these songs we hadn't played in very long," continues Sanchez. "It made us realize these are songs we want to play." 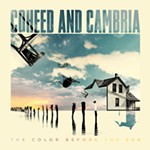 Coheed and Cambria
The Color Before the Sun (Record Review)