High on a string of reunion shows this year, New Jersey's Feelies are back – in print as well. Keeping it in the family, hometown label Bar/None has reissued the band's first two LPs, 1980's Crazy Rhythms and 1986's The Good Earth. Though the original quartet never got name-dropped like Garden State mates Yo La Tengo or, across the Lincoln Tunnel, Television, its juxtaposition of 'burb nerd looks and tightly wound punk helped bands like Weezer (does the cover of Crazy Rhythms look familiar?) bite the group's style. Rhythms, originally on Stiff Records, opens with a song that speaks to much of the Feelies sound at the time: "The Boy With the Perpetual Nervousness." It's all polyrhythmic percussion and dual-attack guitar, inhaling and exhaling around tom-tom, snare, and claves, bolstered by ace remastering. Six years later, The Good Earth appeared, but the Feelies had lost that manic feeling, as well as their rhythm section, and evolved into a quintet. With R.E.M.'s Peter Buck behind the knobs this time, Earth sounds more like, well, R.E.M. It's not a bad album, just relaxed. Within that time span, the landscape had changed, and the Feelies were early for the college-rock boat. The repackaged discs contain only the original track listing but include a code to download bonus material, like a choice cover of the Modern Lovers' "I Wanna Sleep in Your Arms" and Earth's saving grace, "Slipping (Into Something)," both recorded live at D.C.'s 9:30 Club earlier this year. Two sides of a coin from an act knowingly ahead of its time. 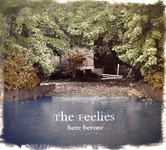 The Feelies
Here Before (Record Review)