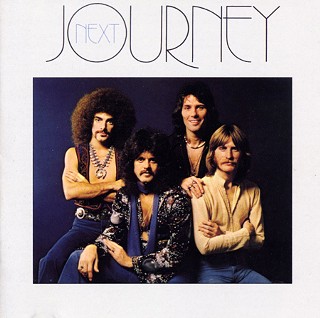 Dazed and Confused trawled its opening GTO through many an unassuming suburb nationwide during the 1970s. Aerosmith's "Sweet Emotion" shook every single one.

One morning, freshman year, Northern California 1979, we were Mitch and sidekick, hitchhiking to high school. Wooderson and Pink pulled over in a Camaro. Burnt orange if memory serves. We looked at each other like the foundlings we were and ran to the car.

"Mama said, she said it's gonna be all right."

Maybe it was an 8-track, maybe a cassette. Only one memory remains in my reptilian music brain from that 10-minute trip: the song on 111 in the back of that cruiser as it peeled from the curb roaring a hydroelectric funnel of sound beating in our chests and in our ears.

"Mama said, she said it's gonna be all right.

Yes she did. 'Well come to bed and

turn out the light.'

She's dreaming through her life."

Not 'til later did the song reappear to me on FM radio, its brief, barroom-piano deforestation clearing the way for a groaning guitar riff straight off the Panama Canal locks. Steinway stoicism bonds to Les Paul bandwidth in the singer's classic rock patent, a voice straight from the heart of local director Richard Linklater's immaculate reflection, 1976.

"That's funny," laughs Gregg Rolie at his kitchen table just outside of Austin. "That's hilarious. So you were Dazed and Confused. Columbia thought that should've been a hit song. That was one of the singles we tried to put out. It just didn't ... they didn't push it. Who knows? There's a million reasons why those things work and don't work."

"Oh yeah. It just came out. I lived in Mill Valley at the time. Yeah, I remember that."

"In '64, '65, I was in high school," says Rolie (pronounced "Rawlee"). "That's the time it started to explode. That was when you'd go up to North Beach in San Francisco and look at the beatniks."

And you did that?

Born in Seattle, Rolie shipped out to Palo Alto, headquarters of Stanford University, 30 miles south of SF, at school age when his father, an executive at Airborne Air Freight, landed an assignment in the city by the bay. Gregg's older brother played piano, so why shouldn't he? Lessons didn't stick, but Jimmy Smith and his Hammond B-3 organ did, and soon the teen was playing in William Penn, a Bay Area Top 40 act.

"I lived in Palo Alto, going to college and playing in bands," nods Rolie. "This friend of mine, Tom Frazer, who played with a couple of frat bands, said he saw Carlos play at the Fillmore on a Tuesday night, which is locals night. Local bands would come in, and Bill Graham would let them play.

"And Frazer saw him play. 'Man, it was unbelievable. I love the way this guy plays. I gotta go find him.'

"So he drove up to San Francisco and searched him out through the Fillmore. He found him working at a hamburger stand. I think it was called Tick Tocks, in North Beach. He picked him up and said: 'C'mon down. I want you to jam with this guy that played with William Penn.'

"The band was fairly well known. He went, 'What the heck.'

"So, he came down and we went where Shoreline [Amphitheater] is now. There were a bunch of farms there at the time. We went out to some farmhouse – I don't even know who knew whom to play there. So we're out there playing and jamming. Of course there was marijuana everywhere. And all of a sudden we hear sirens. The police are coming. I turned to Carlos to tell him we better get the hell out of there, and all I saw was his back about 20 yards down the road!

"He was raised in Mexico – and he lived in the Mission District [in San Francisco]. Nobody needed to tell him anything.

"We ran and hid in a tomato patch, out in the field, until the police left.

Such was 1966. Three years later, August, Carlos Santana and Gregg Rolie led their band through the historic paces of Woodstock. The keyboardist/lead singer was 22. Three groundbreaking discs followed.

"Yeah," acknowledges Rolie. "It took off like a rocket.

"But that's what we were waiting for. You tell any young band that that's gonna happen to you, and you're 21, 22, and you'll be traveling all over the world, and people will love your music wherever you go, well isn't that pretty much what you signed up for?

"It was very cool and exciting. I mean you could do anything. The world was at your feet. Amazing. Probably too much too soon. That's part of the reason the band broke up. We were just full of our own crap [laughs]. It was just way too much for a bunch of young guys. We kind of lost track of things." 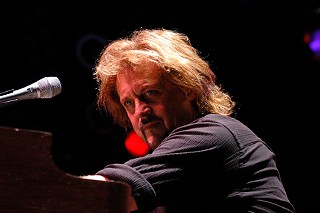 "When the lights go down in the city.

And the sun shines on the bay."

Journey's platinum breakthrough, 1978's Infinity, signaled the end of one group and the beginning of another. "Lights" lit the way, and "Wheel in the Sky" churns one of rock's great Ferris wheels, but the acidic guitar/organ breakdown at the climax of "Winds of March" ruptures a seam between eras.

"[Walter] 'Herbie' Herbert was the stage manager for Santana," begins Rolie. "He built the amps, drove the truck, all that stuff. When Santana broke up, he became the manager of Santana for a brief period of time. When he left that because Carlos was impossible to deal with – which I've heard – he and Neal [Schon] got together and were gonna put a band together.

"I was up in Seattle. I had started a restaurant with my dad, and they asked if I wanted to do anything. I was out of music. So I said: 'What the heck? I'm not doing anything.'"

Neal Schon had become Santana's teenage foil in time for the final installment of the original band's studio triptych. Columbia/Legacy's deluxe reissue of Santana III (1971) notes that Rolie and bandmate Michael Shrieve "discovered" Schon at a club in Palo Alto and that "Carlos had no anxiety about the young Schon coming in. In fact, the two together pushed each other to new heights." If Schon hadn't learned at the feet of the master, he'd at least given him a hotfoot.

"Fusion was big back then, with musicians anyway," shrugs Rolie. "It was based on a lot of soloing, but it was rock. There were songs involved, but when it went to the solos, it just soared. We could sell more tickets than we could albums, which was what was going on. And people loved the band live. I still get people who come to the shows that I do today, and they want to hear all that stuff.

"We did pretty well, but not enough to make a living, so we made a big change and got a singer. That was kind of put onto us by Columbia."

Hearing Rolie's stony sermons, openers "Of a Lifetime" (Journey), "On a Saturday Nite" (Look Into the Future), and "Spaceman" (Next) – the singer's Alpha Centauri blues promising "I'm not a spaceman, no, no, no ..." on the last – defy label rationale for a lead singer, but everybody's got to make a living. Once upon a time, it was Steve Perry.

"Herbie found Perry," smiles Rolie. "He goes, 'This is your new singer.'

"Neal and I listened to him and went: 'Man, this guy is crooning. We wanna rock! This is not what we wanted to do.'

"We were wrong. He had a really pure voice – good, good singer.

"So we learned to write songs for a singer where we had always written songs for soloists. The height of it had always been the musicianship, not the vocals. I did the singing. And that was important, but the place where it took off was the soloing. It was very much like Santana. It was all about the music."

'On a Saturday Nite'

Gregg Rolie: Yes. I loved it back then, when we used to come through here. I always loved Austin. We just dug it, the river running through here, the whole vibe.

AC: "On a Saturday Nite" should be in that movie. Still sounds amazing today. That and the Beatles cover.

Moving to another musical wellspring in 2007 ("very much what San Francisco was in the Sixties"), with the fruits of a 15-year layoff from the road – his wife and two children – plus the requisite wall of gold and platinum trophies and his Gregg Rolie Band, whose Santana DNA speaks to its volcanic nature, obviously agrees with Rolie, 62, a Red River frequenter. Looking at the proffered-for-autograph CD of Journey's In the Beginning, fireproof vessel of the band's first three sunspots, Rolie perks up.

He starts scatting the part of the song that sounds exactly like Kansas' "Carry on Wayward Son."

"We played with Kansas, and they wrote that afterwards," laughs Rolie. "Totally stolen. Yep, Dazed and Confused."

"Mama said, she said it's gonna be all right.

You know she said, 'You got to see the coming light.'

You know you are. You're riding through your life.

"Well you know you done your best.

All you need's a little rest.

You done your best, yes.

"On a Saturday night.

On a Saturday night.

Everything is all right."

Journey V.5 croons at the Frank Erwin Center on a Tuesday night, Sept. 29. 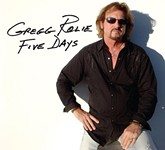