Josh Tillman is the newest member of Fleet Foxes, the drummer whose conversational banter and sublime harmony lent a euphoric glow to the Seattle outfit's breakthrough performance at the 2008 Austin City Limits Music Festival. He's the last person who would tell you so.

"I haven't been involved in the writing process," he reflects via e-mail. "My role has mostly been to play the songs live. This year was the first time I've ever really played for a big, captive audience; it's pretty bizarre. Probably makes me a little crazy."

If Tillman appears hesitant to embrace his role in the spotlight, that's because for the last five years he's released some of the most elegiac roots music around, almost completely under anyone's radar. A native of Washington, D.C., the 27-year-old songsmith writes with the chilling Southern Gothic streak of Flannery O'Connor, creating stark portraits of people always one step shy of redemption.

"It's personal and not personal at the same time," offers Tillman, who's currently on tour with his brother's like-minded band, Pearly Gate Music, and prepping a new 7-inch single. "A lot of it's about death, trying to cultivate original ideas about an afterlife. There's biblical imagery but it's all sort of decontextualized."

Year in the Kingdom, Tillman's latest full-length, released on Tuesday, marks his strongest and most concise work to date. The album is a quiet contemplation of the sacred and profane, delivered with the same pin-drop clarity he displayed at Mohawk during South by Southwest in March. The title track and "Earthly Bodies" conjure the twilight romanticism and warmth of My Morning Jacket's early Southern gospel, only stripped of the reverb.

"I actually see it as the exact opposite of existential," Tillman opines. "Most of the songs on this record, as I see it, are about things I've never experienced: old age, death, being born again. Most of the songs aren't sung from my perspective. It's a projection. It may be existential in that some of it is about the nature of existence, but it isn't necessarily empirically informed. I don't like existential spirituality, the differentiating between spirit, feeling, and intellect, or whatever.

"I hope some of it is uncomfortable." 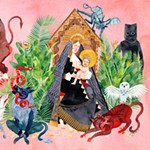