There are two sides to Brian Sampson. He's the owner/operator of Western Vinyl Records, and he's also Bexar Bexar, an ambient artist on the label, creating shimmering sound collages of acoustic guitar and digital manipulation. In the dining room of his South Austin home, both halves leverage for position.

Scattered across the left side of the room is an assortment of electronic equipment accumulated from thrift stores and flea markets. On the opposite wall sits Western Vinyl's inventory, boxes upon boxes of carefully organized records and CDs. Everything is accounted for on a clipboard nailed to the wall, except for catalog number WEST 013, an EP from Isaac Brock's side project Ugly Casanova that was never released, due to contractual conflicts.

"I don't think of myself as a musician," Sampson reasoned to the Chronicle two years ago (see "Welcome to the Machine," Oct. 19, 2007). "I'm exploring textures and tones instead of melodies, trying to find moments that work while avoiding anything overly sentimental. The hardest part of what I do is finding time to record. I have to be in a completely different mindset, and it's hard sometimes to wind down and switch gears."

Since then, the balancing act has only gotten more difficult.

The label's national profile has grown exponentially thanks to heralded releases such as Here We Go Magic, the self-titled LP from Luke Temple's recent Afro-pop project, which has sold more than 7,000 copies to date, more than half digitally. Numbers in the high four digits are notable for micro indies, so it's hard to believe Sampson got audited by the IRS after consistently writing off substantial losses.

"There have been plenty of times when I felt like quitting," sighs Sampson, 37, who handles all the mail-order business and most of the imprint's publicity needs. "Sometimes I don't know why I do it."

Following the blueprint of Simple Machines' Introductory Mechanics Guide to Putting Out Records, Cassettes and CDs, Sampson started up Western Vinyl in 1998 with Ryan Murphy to release such lo-fi indie rock projects as Win Foster and Havergal, respectively. Seven-inch singles from Knife in the Water, Windsor for the Derby, and Songs: Ohia followed in short order, along with an early trifecta from Brooklyn's Dirty Projectors. Then there's the label's Portrait Series, wherein artists such as Will Oldham and Goldmund wrote original music to accompany images of their choosing. Murphy eventually withdrew to attend the Massachusetts Institute of Technology.

If there's one constant in the catalog of Western Vinyl, it's the purity of expression and how deeply the music resonates with every listen. That stream of continuity can be heard in the fractured, glitch-pop of Japanese pianist Shuta Hasunuma, Callers' haunted folk-blues, and the icy, minimal Krautrock of Glass Ghost. Sitting in the middle of his dining room, Sampson cycles through some of the demos that now arrive daily.

"I'd like to think that it's sincerity that I'm drawn to," Sampson offers.

There's one demo in particular that's caught his ear, a Midwestern act that conjures the spirit of the Beach Boys' Smile sessions. Even though no contracts have been signed, he's already put the gears in motion for a spring 2010 release, along with new albums from Balmorhea, Luke Temple, and with any luck, Bexar Bexar.

"I know someone else would probably put out some of these," he smiles, "but I'm so lucky to be a part of all these great records."

The one that got away: Grizzly Bear 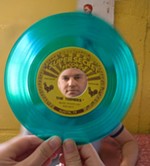