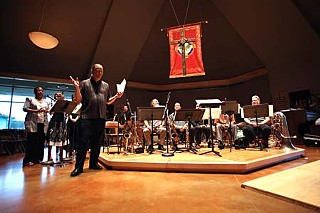 
"Bring the heat," Tina Marsh used to tell the press. On Friday, Sept. 11, rain brought relief. Inside St. James' Episcopal Church, where Marsh's memorial concert had relocated from Laguna Gloria Amphitheatre, candles flickered atop a makeshift altar celebrating the local jazz singer, who died of breast cancer in June. Baring her 4-year-old behind in one photograph, Marsh held sway in the Eastside house of worship as the musical juggernaut she founded and cared for so fiercely paid her – and itself – final tribute in a program titled Echoes of the Heart. For the better part of three hours, then, the Creative Opportunity Orchestra pulsed heart exclusively. John Mills, a composing member of CO2 for nearly all of the River City collective's three decades, conducted the big, big band, guiding when he wasn't playing and leading some 17 pieces, including a trio of local singers standing in for the fallen bandleader. In the chorale of Suzi Stern, Susanna Sharpe, and Hope Morgan, Tina Marsh sang all night long, hauntingly, arialike, spirit unbound, Tina to a T. Original Orchestra engine Rock Savage flew in for the farewell just as tuba tamer Jay Rozen returned from New York, and Bob Rodriguez was at the piano metering out spine-tingling rocket science. "Benediction," one of Marsh's very first CO2 stimulants, began with the evening's substitute chorus and its wordless intonation before crying out in the saxophone of first chair Alex Coke and cresting with Dennis Dotson's silver trumpet. Open-air jazz inside a chapel might be considered miraculous in some quarters. Equally so, Zeke Zimmerman, second son of Marsh and CO2 alum Randy Zimmerman, proved the concert's breakout soloist, tap-dancing out in front of the group in marathon sessions of bipedal expressionism. Standing ovations were his due. Same was true of Coke's "Rain," which closed the first 75-minute portion of the show, bassist Buddy Mohmed strumming Middle Eastern flamenco on an acoustic guitar, while Brian Allen's trombone solo talked in muffler straight out of a Peanuts TV special. Rodriguez's Gershwin at the piano and Steve Vague's charged soprano sax statement gained atmospheric ionization on Steve Schwelling's big beat. The second set, eaten whole by three 20-minute epics – Marsh's passionate "Courage of the Butterfly," Rozen's "14CO2," and Rodriguez's "Shrouded Heart" – left the full assemblage drained, yet set up Rock Savage's brassy closer "Clocks." Sole encore "Kai Aliso," a final number by Tina Marsh, ceded all floor space to Zeke Zimmerman. The future is his. 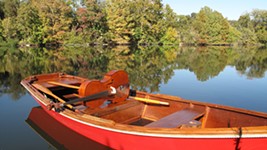 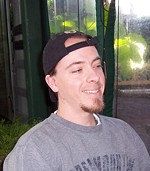