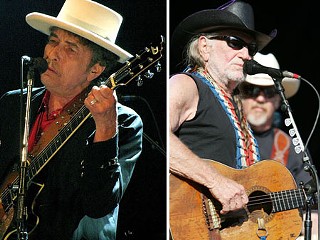 Take Me Out to the Ball Game

At the right hand of the father, Charlie Sexton smiled at Bob Dylan midway through "I Feel a Change Comin' On" at the Dell Diamond on Tuesday, Aug. 4. A regular in the Bard's stable spanning 1999-2002 (see "Red River Shore," Nov. 7, 2008), the Arc Angel's staggered solos and tumbling blues perfectly accentuated Dylan's rolling thunder and devil's advocate delivery, especially during the Texas border heatstroke of "Forgetful Heart" and "Jolene" from latest Together Through Life. Alongside longtime Austin slinger Denny Freeman, Little Charlie carved new paths over familiar territory on "Highway 61 Revisted" and the simmering encore closer "All Along the Watchtower," providing a noticeable jolt to Dylan's rugged, American ragtime revue. Earlier in the afternoon, Willie Nelson, with guest Ray Benson, delivered a set that's now pending historical landmark status, and John Mellencamp rehashed his small-town, nostalgic glory with little success. The stifling atmosphere was only heightened by Round Rock police, who busted people in broad daylight for smoking out, nearly escorting OTR out for booing from the stands. Thankfully, Dylan helped shrug off such matters with the opening refrain to "Rainy Day Women #12 & 35": "Everybody must get stoned."

Room 710 shuttered its doors last weekend, but for one night at least it was the last club standing as live music rang out its dual corridors right until the clock struck 2am. Local space cadets Pong, who helped christen the venue in 2000, brought things full circle on Saturday by issuing spazzy synth-pop and previewing some new material, Gary Chester at one point relinquishing guitar duties to members of the crowd. Equal parts Prince and podophilia, Austin's costumed Foot Patrol manicured an arousing combination of retro-soul, fetish funk, and 1980s hip-hop astride a backdrop of foot erotica. "We feel like pussies playing dance music at Room 710," admitted bassist Hung Nguyen midway through the set. "Where's Dixie Witch when you need them?" Oddly enough, Foot Patrol provided the perfect ending for Room 710, a venue dedicated to local talent and welcoming of all kinds. Standing next to the soundboard as the evening drew to a close, owner Asher Garber offered only a few parting words, "Thank you, Austin, for nine years of business," he said; then, with characteristically dark humor, added, "See you around the bend."

Austin's El Tule is to Hippo Films' latest, Pepe & Santo vs. America, what Devotchka was for Little Miss Sunshine – a memorable and multicultural backdrop that, with any luck, will become a springboard for national exposure. The local septet landed 16 songs on the soundtrack, almost evenly split between its 2007 debut, Volumen 1, and its forthcoming companion, Volumen 2, due later this year. "The movie is like Napoleon Dynamite for Mexican-Americans," laughs guitarist John Dell. "They make fun of everyone and everything. There's some really good comedy in there." The movie was received favorably last w-eekend at the New York International Latino Film Festival, and El Tule enchants Jovita's on Friday, Aug. 28. Meanwhile, one week after a red carpet appearance at Galaxy Highland 10, local teens the Daze perform at Waterloo Records (Tuesday, Aug. 11) to commemorate the release of its Rick del Castillo-produced debut, Straightjacket Hymns, and the soundtrack to Bandslam. The locally filmed musical comedy also features cameos from Austin's most fashionable MCs, Zeale and Phranchyze.

In what came to be known as "Slam Drunk," OTR's Chronicle squad took home the gold in Club de Ville's first double-elimination basketball tournament, with a hard-fought victory over Jackalope late Saturday night. Thanks to master of ceremonies and Til We're Blue or Destroy frontman Will Rhodes for pulling the whole spectacle together and providing play-by-play commentary (and drink tickets). Here's a quick recap of some between-game chalk talk.

The nicest guys to finish last, Grand Champeen is back in what bassist Alex Livingstone deemed "the Laboratory," writing the follow-up to 2007's Dial T for This.

After a brief European run, the Black Angels are set to record overdubs next month in California for their highly anticipated third album, due early next year on Suretone.

La Snacks is returning to its stomping grounds in Beaumont once more to host the second annual Connect the Dots Festival in what was formerly the Scout Bar, Sept. 11-12, featuring local Austin contemporaries the Midgetmen, Death Is Not a Joyride., the Boxing Lesson, and Mothfight!.

Where Is Thy Sting?

Detroit's missing link between the proto-punk political fury of the MC5 and the Gories' steamrolling garage-soul, Death is confirmed to appear at the 2009 Fun Fun Fun Fest, Nov. 7-8, in Waterloo Park. The power trio self-released only one single during its brief career, 1976's "Politicians in My Eyes," but was rescued from obscurity earlier this year by Drag City Records, which resurrected the band's 1974 demo, ... For the Whole World to See. For the first time in three decades, the surviving members of Death – brothers Bobby and Dannis Hackney – are playing live, most likely with help from Lambsbread guitarist Bobbie Duncan. "It's a big deal," enthuses Transmission Entertainment booker Graham Williams. "Part of me wanted to let it remain a mystery of the past, but they're already doing a couple of dates this fall, so I wanted to be a part of it." Other acts added to the fourth annual fall classic include Brooklyn punks Les Savy Fav, along with GZA, Atlas Sound, the King Khan & BBQ Show, Lucero, Health, and Austin's Shearwater. Mohawk proprietor (and eligible bachelor) James Moody promises more "extracurricular activities" plus recycling incentives. The full lineup drops Aug. 17.

• Gimme Fiction: Spoon's incendiary three-night stand at Stubb's last month is now available for download through the band's website for $15. The recordings were taken from the soundboard in multitrack HD and professionally mixed, though all the unreleased material has been nixed from the sets: www.spoon.shop.musictoday.com.

• Perennial local favorite Bob Schneider, who holds a Monday night residency at the Saxon Pub in August, has signed with Dallas' Kirtland Records for his latest, Lovely Creatures, due Sept. 29.

• David Garza and Suzanna Choffel headline a benefit at El Sol y la Luna on Sunday, Aug. 9, for the Austin Music Foundation, the local nonprofit known for its educational forums, industry networking, and career development resources. Tickets are $35, which includes complimentary appetizers and beverages, with all proceeds going toward AMF.

• Congrats to the Tiny Tin Hearts, winner of the Chronicle's first-ever Sound Wars online battle of the bands. The local folk-pop collective will share the stage with the Fireants, Nakia & His Southern Cousins, the Paula Nelson Band, and T Bird & the Breaks at the annual Austin Chronicle Hot Sauce Festival at Waterloo Park on Sunday, Aug. 30. 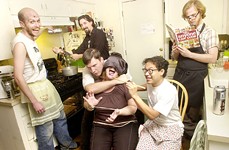