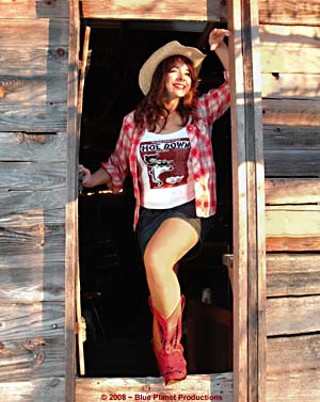 In the Land of the Rising Sun

Local Queen of the Barn Dance Leeann Atherton left earlier this month for her first ever Japanese tour. "The response has been amazing; I walk in the room, and the polite full house applauds," she relays from Hiroshima, adding that she already needs to ship over more merch. "The wall at one club, Kapone, has signatures from Michael Fracasso, Scrappy [Jud Newcomb], Kevin Carroll, Walter Tragert, Gurf Morlix, Randy Weeks, Colin Gilmore, Beaver Nelson, and Matt the Electrician." That's largely due to Shuichi Iwami and Keiji Matsumoto. Since 2004, the two independent Japanese bookers and regular attendees of the South by Southwest Music Fest have created a niche market in their native underground by regularly hosting and routing Austin singer-songwriters through intimate clubs (capacities vary from 20 to 80 people), a stark contrast to the experience of Asylum Street Spanker Stanley Smith (see "Big in Japan," May 2, 2003). "First of all, I am not a professional promoter or agent," writes Iwami, who was first turned on to roots music by Lucinda Williams' Car Wheels on a Gravel Road and Loose Diamonds' Burning Daylight. "I've been doing what I've wanted. ... I've been totally addicted to the [Austin] scene."

Forget about the transitional, late-night television battle brewing between David Letterman and Conan O'Brien. Jimmy Fallon has the best house band in the business – the Roots. Just ask Ocote Soul Sounds' Martín Perna, who, as part of the Antibalas horn section, sat in recently for Paul Simon's revered rendition of "Late in the Evening." "For me, the rehearsals are the most exciting part; you can savor each moment a bit more," enthuses Perna, a new Austinite. The collaboration stemmed from ?uestlove's keen interest in the off-Broadway musical Fela!, which prominently features Antibalas, led by musical director and trombonist Aaron Johnson. Taking a cue from the Roots' annual picnic, Perna's in preliminary talks with the founder of California's Treasure Island Music Festival about hosting his own extended-family musical gathering, fitting considering his personal ties to TV on the Radio, Sharon Jones & the Dap-Kings, Thievery Corporation, Celebration, and Grupo Fantasma, among others. "Music doesn't come out of a vacuum," he stresses. "There's a musical lineage through all of this that connects very naturally."

From Our Living Room to Yours

As a former touring member of the Winter Blanket, Fitzgerald, and the Stilts, Todd Hansen knows the value of a decent night's rest on the road. That's why the recent Austin transplant founded Better Than the Van, a locally based networking site that links struggling bands with individuals across the country willing to offer up a couch or floor space to crash on, complete with profiles and guest-book forums. Consider it DIY touring for the 21st century, and it's quickly catching on. There are 41 registered hosts in the Austin area alone, and the site is building toward a redesign that would incorporate more ad space and a possible supplementary subscription-based service. "It seemed like a natural extension to put this idea online and see if our culture had gotten to the point where it wouldn't seem weird," says Hansen, who leads by example, hosting both Boston's Bang Bang Blue and California's Backup Johnny this week. As such, Hansen has some general guidelines for proper band etiquette. "Be really polite and realize the people whose door you're knocking on aren't as used to this as you are," he laughs. "Offer to get them into the show; throw 'em some records and maybe a T-shirt or two." www.betterthanthevan.com.

Following in the flight path of collaborator Andrew Kenny of the Wooden Birds, David Wingo, the autumnal songsmith behind Ola Podrida, has moved back to town and signed with Austin's venerable Western Vinyl. Ola Podrida's self-produced sophomore effort, Belly of the Lion, on which Wingo plays every instrument save for a few drum tracks, drops Nov. 10 and picks up where the band's stargazed cover of Joy Division's "Atmosphere" for The Signal soundtrack left off. "It's a guitar record for sure," assures Wingo, who opens for local instrumentalists and labelmates Balmorhea at the Cactus Cafe tonight (Thursday, July 9), with help from Kenny and Ola Podrida drummer Matthew Frank. "I've been having fun plugging in effects pedals again." Along with providing the score for the upcoming documentary Soundtracker, Wingo recently finished up work on Gentlemen Broncos, the latest comedy from Napoleon Dynamite director Jared Hess. "He asked me if I could do crazy Logan's Run-type music," he confides. "It's this synthy, spacey, spaghetti Western. It's ridiculous and over the top."

• The McCarren Park Pool may have closed, but JellyNYC revives its infamous Pool Parties summer concert series this week at the East River State Park in Brooklyn, thanks in no small part to Transmission Entertainment. The local entertainment coalition booked the entire eight-week-long series, featuring Austin locals White Denim, Grupo Fantasma, and Trail of Dead, and there's been talk of branching out nationally. "It'd be cool to have free summer concerts in Austin, even on a smaller level," says Transmission's Graham Williams.

• Neon Indian, the local electro-psych side project of Vega's Alan Palomo, has signed to boutique label Lefse Records and releases its debut, Psychic Chasms, on Oct. 13.

• If there's any doubt as to the expansive reach of Austin City Limits, the Music Cellar, Winnipeg, Manitoba's premier music school, recently wrapped up a five-night festival based on the theme North of Austin. Each of the 148 acts covered music originally featured on ACL, with performers required throughout the semester to complete homework assignments on the history of the show. Consider it money well spent that the city of Austin recently renewed its co-sponsorship agreement with KLRU through September 2011, to the tune of up to $225,000 annually.