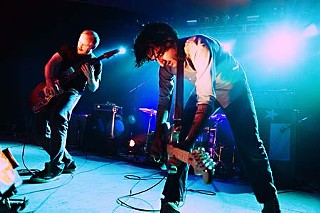 
"Count of three, say your favorite thing about America," prompted Octopus Project's Josh Lambert during the local electro-rockers' knockout set. Explosions in the Sky! In Austin on the Fourth of July! The headliners acknowledged most acts' reluctance to follow OctProj's big-stage thrills, but not them, not this night, not on home turf. Wooden Birds, who opened the three-band bill with its "first show in Austin, more or less" according to another native resource, beloved frontman Andrew Kenny, kept "the midtempo hits pumping" in a winning display of veteran pop smarts. The American Analog Set inventor should be slowing with age, but Kenny's gone from no-tempo to 1970s foot-tappers with characteristic charm. Explosions thanked them also. "It's not only a day for the USA, but I like to think of it as Explosions Day," offered one of Explosions' guitarists, the quartet born on the Fourth of July, 1999, in the Texas state capital. "We've been a band 10 years now, 10 years to the night." A night any self-respecting local EITS fan wouldn't have dreamed of being anywhere else. Rising from a familiar position, axmen Munaf Rayani and Mark Smith flanking bassist Michael James as they bowed to their guitar pedals, the hometown instrumentalists dawned and set 85 minutes later with the heartfelt belief of its decade-best third LP, The Earth Is Not a Cold Dead Place. In between, there were beach balls, tidal waves of sound, and a bright white light. Where other post-rockers rely on volume, Explosions in the Sky defines itself through voluminous emotion worn on the sleeves of its three string-benders and marches to the beat of drummer Chris Hrasky. Its clear bell tones and atomizing crescendos can't be accounted for by Chuck Berry swearing that "Johnny B. Goode" could play the guitar just like ringing a you-know-what. And it's not explosions that make Explosions in the Sky. It's the sea and oceanic in-between, brief bursts of distortion and strobe-light poltergeist flashes that make rock boys literally quiver with ecstasy. Penultimate closer "Catastrophe and the Cure" moved mountains and psyches. "That was exhausting and exhilarating," proclaimed a band spokesguitarist as goodnight. "See you for the rest of our lives."

"The Birth and Death of the Day"

"A Song for Our Fathers"

"Your Hand in Mine"

"Catastrophe and the Cure"

"The Only Moment We Were Alone"

Explosions in he Sky