Never travel for music. From Johnny Cash at Emo's to Beck at Westlake High School, the superstars eventually come to you, Austin. True, the Montreal Jazz Festival's global get this year, Stevie Wonder, who bookended the international gathering's initial headliner 30 years ago, Ray Charles, probably won't give a three-hour free show at Auditorium Shores anytime soon, but most of the festival's headliners its first four nights out of 12 have wowed our town: Wynton Marsalis' Lincoln Center Jazz Orchestra, Dave Holland, Chucho Valdés, Wayne Shorter.

For him, the Montreal Jazz Festival graciously flew me in. And put me up. Again. Fortunately for everyone, Stevie Wonder only required a drive to Houston (see Music blog "Signed Sealed Delivered," Dec. 5, 2007), especially since you couldn't get anywhere near him in Montreal's wet, besieged, downtown jazz empire. Rava and pianist Stefano Bollani's set concluded just ahead of Wonder's, capped off with Canada Day fireworks. American independence weighs in at 233, while its Canadian counterpart – July 1 – counts 142.

"A little," said Rava when asked how well he knew the United States. Hours before his performance, in a dark corner of unofficial jazz festival headquarters at the Hyatt bar, he added, "I also know Dallas and Fort Worth." Since now I've traveled to witness Rava, music's Murphy's Law dictates that the Italian trumpet sage is due at any moment in Austin. After all, last year's jazz fest headliner, Leonard Cohen, who hadn't played his hometown in 15 years (see "Live Shot," July 4, 2008), let alone the rest of humanity in that time span, opened his North American tour here in A-town three months ago (see "Live Shots," April 10). On second thought, traveling for music may be the only way to recruit it here. Rava and Bollani could melt the One World Theatre.

A bare stage with a black baby grand contrasted the bustling 500-seat downstairs theatre of the 19th century Gesù Church, whose typically robust and genuinely engaged Montreal jazz intelligentsia clearly relished audience with the Genoa-dwelling Rava, 70 come August. His silver horn blew Miles Davis, Chet Baker, Tomasz Sta´nko (for interview, see austinchronicle.com/earache). Bollani, surfing his piano bench with leg-kicks and push-backs, put forth ominous bass notes while Rava filled crevices not really there, the two collaborators of 2007's The Third Man on Criterion Collection jazz equivalent ECM not so much in conversation as simultaneous exploration – jazz. Rava would rattle off a sharp cluster of notes, and Bollani would respond with a rumble that built to a domino ballet of frantic black-and-whites. Conclusions were fiery, and ballads the aftermath of a storm. Rava's tart tone turned to scotch on Stan Getz's "Dear Old Stockholm." The sons of Italy became Laurel and Hardy in their song back announcements. Bollani especially is a mischievous soul, a classic jazz interpolator full of humor, with the physical agility of Chico Marx. His empathic support of Rava allowed the maestro freedom of hue. During the first of two encores topping a nearly two-hour, red and blue sear, Rava hit his trumpet on the microphone, and, as momentarily surprised as he was, a far more startling reaction to the clank was realization that such sounds had been made through a thin, pounded, piece of metal.

La Zona Rosa- and One World Theatre-goer from before the Bush embargo, Valdés began at Ellington, matured into Afro-Cuban soul possession and clave clampdown, and retired only after a third encore and attendant number of standing ovations. With Art Tatum's speed of sound, Gershwin's classical melting pot, and Mozart's melodic genius, Valdés isn't just jazz's greatest living pianist. He's one of planet Earth's foremost instrumentalists, the Jimi Hendrix of the ivories, whose absorption of all that's come before him defies DNA disentanglement. In Chucho Valdés' basketball center heights, jazz keeps expanding in a manner that another 2009 Montreal Jazz Festival force of nature, Texan Ornette Coleman, predicted through his rocket science. Both constitute a trip to the moon. 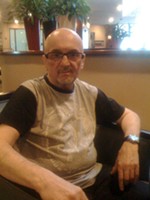