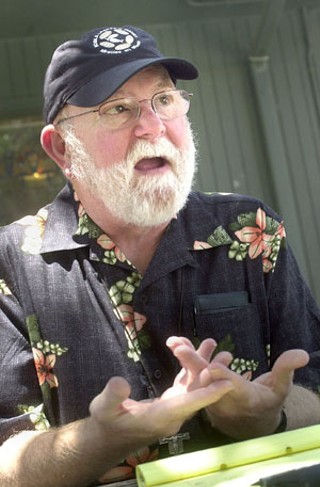 Founded in 1998 by Alan Graham, a former local real estate agent, Mobile Loaves & Fishes is a volunteer, faith-based, Christian outreach ministry providing food, clothing, and dignity to the homeless via an armada of catering trucks that hit the streets 365 days a year to feed the homeless wherever they may be. Mobile Loaves & Fishes currently has a fleet of 17 trucks in six cities throughout the country.

Austin Chronicle: What's going on with the homeless population in Downtown Austin? There seems to be a new breed of highly aggressive, intimidating panhandlers that's shown up Downtown in the past year.

Alan Graham: The real crime is endemic to the alcohol and drug scene Downtown and what's happening on Sixth Street and Red River. I think when you combine the growth of the alcohol and drug trade with this extraordinary explosion of population that's happening Downtown, the crime situation is almost inevitable, whereas the homeless piece of that population is relatively small.

I will tell you that the advent of crack cocaine on the scene 25 years ago and its unfettered growth since then is a huge contributor to [Downtown crime]. I know lots of alcoholics, and I have close, personal friends who are heroin junkies, but when you get around these crackheads, it's a different personality. So I think that a lot of this aggressive behavior that you're witnessing, whether it's from the homeless population or the nonhomeless population, is being fueled by this drug.

AC: Nobody's suggesting that the recent crime surge Downtown is due to the homeless; in fact, most clubowners agree the homeless are being preyed upon as much as anyone. Do you think that's a distinction made by the Austin Police Department?

AG: I really think the world of [Police Chief] Art Acevedo. He's a phenomenal guy, and I call him a friend. The reality is there's only one solution to the issue of homelessness and that's homes. Everything else short of that is a failed attempt. So Acevedo is stuck between a rock and a hard place. He has the Downtown community calling and saying, "Hey, there's guys in my alleyway urinating, smoking crack, aggressive panhandling, whatever," and he's got to deploy his resources Downtown to deal with those particular issues. But it does nothing. It stops none of those things. All it can possibly do is shift it to someplace else, whether it's a block over or two blocks over. It's very much a NIMBY [not in my back yard] situation. If you move the homeless from where they are, they're only going to end up in someone else's back yard. The only solution to the homeless problem is, as I said, homes.