Save Me From What I Want When Annie Clark played the 2007 Austin City Limits Music Festival, it was as a late add, in the middle of the day, on an unfortunately placed stage. After her short but sonic solo set, Clark, in a white dress and ripped black tights, cut her losses and indulged in a bit of stagecraft. Her face was eerily serene as she clawed at the neck of her red guitar, pulling out noise, snapping strings, and casually remarking afterward, "I'm bleeding."

That scene foreshadowed the multi-instrumentalist's second album, Actor ("Phases & Stages," May 8), which includes a song called "Laughing With a Mouth of Blood." That intriguing balance of black, white, and red is Clark's calling card. Like the awkwardly charming cover of Actor conveys, she's one of Woody Allen's women, damaged but hyper-self-aware.

Clark was raised in Dallas, started playing guitar in middle school, and by her teens was on the road with her uncle, guitarist Tuck Andress, of Tuck & Patti. She remained a solo player through her early 20s, attending the Berklee College of Music and collaborating with acts as diverse as the Polyphonic Spree, Sufjan Stevens, and Glenn Branca. She took on the appropriately austere St. Vincent moniker for her 2007 debut, Marry Me.

It's Clark's delicate determination to do things her way that makes the 26-year-old's follow-up all the more impressive. She wrote the album on the computer in her Brooklyn apartment over the course of nine months.

"About how long it would take to birth a baby pony, if I was a horse," she notes from sound check in Minneapolis.

In the studio, the songs took on a looser feel, propelled by Midlake's rhythm section and Texas superproducer John Congleton. The result is darker and thicker than her debut, electronic beats matching distortion and riff, each tune setting a different scene in a different color. The characters are all extensions of her, motivated by desire ("Save Me From What I Want"), deceit ("Actor Out of Work"), and reinvention ("Just the Same but Brand New").

In Annie Clark's movie, however, the female isn't the one being looked at; desire is inverted. As she sings on opener "The Strangers": "Lover, I don't play to win. For the thrill, until I'm spent."

Austin Chronicle: When we spoke at Fun Fun Fun Fest last year, you mentioned your first show ever was Steely Dan. Am I sensing some of the Dan on Actor, or am I hopelessly projecting?

Annie Clark: Honestly, I've been listening to the Dan since I was like 8 years old, so it's like moonbeams from my fingertips: a little Dan comes out in everything I do.

AC: You also mentioned there were going to be some "smooth jams" on the new album. I'm feeling the jams.

Clark: Oh, good! I think what makes something a jam is the sexy rhythm section. And McKenzie [Smith] from Midlake played sexy drums, which takes it into jam-land. Otherwise, it would just be, like, esoteric-woodwind-creature-land.

AC: Speaking of esoteric-woodwind-creature-land, where did the songs for Actor spring from? What themes were in your head?

Clark: With Marry Me, it was more this romanticized idea of love and of the world. With Actor, I had this mantra: I wanted it to be really, really human. So I wrote about things that aren't really romanticized or very pretty. They're desperate or deceitful or pathetic.

AC: There's certainly a cinematic hue to the songs. Were you scoring movies in your head?

Clark: Yeah, rather than grand generalizations, I was focusing more on painting these tiny little details, something that would give someone an idea of the scene. Like in "Laughing With a Mouth of Blood," I was envisioning this young person going to Hollywood and staying in a hotel and watching televangelists on TV and sending letters back home saying things are going well. You can't tell if they're delusional or just putting on a happy face. Stuff like that.

AC: There was more of an interest in the dramatic this time.

AC: So you were watching a lot of films during the writing?

Clark: I revisited a lot of the Disney films from the Thirties. This Terrence Malick film, Badlands. The Piano Teacher. Stardust Memories. A lot of Woody Allen. But rather than literally influence me, I'd say they osmotically influenced me. I watched it and let it soak in, and it comes out in the writing.

AC: Were there pressures or expectations going into this album?

Clark: Not outside pressure, but I put a lot of pressure on myself to make something better and more refined in that every note had a purpose. Each part has intention, narratively and mathematically. I did a lot of adding, subtracting, inverting to make sure the songs had the most economy. Like the Native Americans did with the buffalo – each part can be used for something else.

AC: So you weren't playing these songs on the road?

Clark: No, these were studio Frankensteins. It was a very esoteric writing process, made mostly on the computer in my apartment in Brooklyn. I actually got noise complaints. So I put on my headphones with the idea that I wanted to be a film composer. I was bored with the guitar and piano and wanted to make something that was better than what I could play with my fingers or something that was different than what I would instantly play with my fingers.

AC: Do you find that comforting, the idea of just you and a computer making music together?

Clark: Yeah, it's sort of like 21st century candlelight – the warm glow of an Apple screen. It's pretty romantic if you think about it. If only Shakespeare could have had a MacBook.

AC: Going back to Badlands, what do you like about that movie?

Clark: The imagery of the house burning down. The idea of young, crazy love. My favorite scene is when [Sissy Spacek and Martin Sheen] have that period in the forest, making a life for themselves. I started thinking, "OK, if I was dropped in the mountains, how long could I survive, what would I eat, could I make weapons?" The idea of, "We're gonna make a tree house and live there forever."

AC: Was there a film that inspired the song "Marrow"?

Clark: I think I was watching The Wizard of Oz. [We're briefly interrupted as she moves away from the increasing noise of sound check and passes her drummer: "I think you were in my dream last night. ... No, not like a sex dream!"] Um. Um. Um. Sorry. "Marrow." Yeah, so you've got this person who wishes they had a spine made of iron, you know, "Can you fix my parts that need oiling?" It's my homage to The Wizard of Oz, in a human way.

AC: Have you always been a good storyteller? 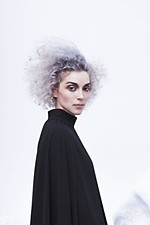 Massive
The compassion of St. Vincent 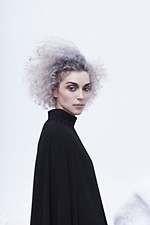