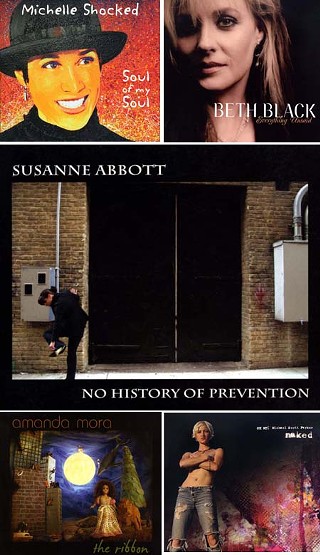 Michelle Shocked always gives 150%. Soul of My Soul (Mighty Sound) is a tad preachy ("Ballad of the Battle of the Ballot and the Bullet Part 1: Ugly Americans"), but that's our gal, hitting heavy with punky rock ("Giant Killer"), then stealing hearts with gentle folk-pop ("Pompeii"). On her fifth disc, Beth Black's confident songwriter rock finds an even groove, lovingly crafted like the jewelry she makes. Everything Unsaid (Shrike Records) speaks for itself, then, and songs like "Sunshine in Your Happiness" and "Alice" are AAA radio quality for fans of Sheryl Crow and Kathleen Edwards. Susanne Abbott's No History of Prevention follows the lush, languorous direction of Sarah MacLachlan and Tori Amos by purveying a mannered neo-folkiness. "Jacqueline," "Johnson City," and the commanding "On My Head" also demonstrate a dramatic flair that suggests Abbott is a powerhouse performer live. Amanda Mora's The Ribbon is as pretty as its satiny title suggests. Born in Austin to musician parents, Mora informs the eclectic boop-oop-a-doop of "Water & Love" and jazzy tone of "Chasing Coattails" with charm, yet it's in her title track that Mora rises and shines. "The Ribbon" is pure traditional folk, yearning and bittersweet and written like an old Irish ballad, a signature song for her career. Forget the silliness that accompanies having to explain that Michael Scott Parker is female since her fourth album, Naked, is brilliant and all over the map. From the bare, Tom Waitsian title track and the PJ Harvey-ness of "Good With a Knife" to the opening "Let's Make Crazy," Naked runs in a number of directions, provocative and successful in every one.